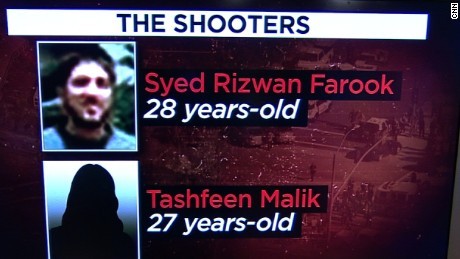 Twenty-seven-year old Tashfeen Malik, the wife of Syed Farook, and the female half of the California mass murder spree, is reported to have pledged her bay'ah--or oath of loyalty--to ISIS just before donning black military-style attire, taking up arms, an IED, and heading off with her husband, Syed Farook to kill fourteen people and wound seventeen others in cold blood. What would drive a woman to violate the most basic of maternal instincts--that is to protect her own child above all else, and to protect her relationship to her child, and in doing so to become a killer and die herself?

The answer lies in the sick ideologies circulating today and embraced by terrorism groups, including ISIS, who endorse a "martyrdom" ideology. Other examples of mothers who left their children to kill themselves (while murdering others), include Palestinian Reem Riyashi--mother of two children: three-year-old son Obedia and eighteen-month-old daughter Duha. Riyashi was preceded by Chechen female bombers--also mothers, who went on so-called "martyrdom" missions also leaving their children behind.

In January of 2004, during the Second Intifada, Riyash approached the Erez checkpoint leading out of Gaza while wearing a suicide bomb. According to the IDF, she thwarted security procedures there by pretending to be crippled--claiming to have plates in her legs that would set off the metal detectors, she requested a body search instead.

As with most women, she was not suspected of being a cold-blooded killer. But when taken to the private area for her check, Riyashi defied most expectations of women and mothers. She detonated her two-kilogram bomb--killing four Israelis (two soldiers, a policeman and a civilian security worker) and wounded an additional seven Israelis and four Palestinians. Riyashi and her Hamas senders took full advantage of the trust most of us put in the female gender, as well as in this instance, of Israeli decency to a purported handicapped individual--to kill as many as possible.

Riyashi's suicide attack shocked the world, particularly as she had posed with her small children in photos taken before her attack. The appalling photos of a mother brandishing an automatic rifle with a rocket-propelled grenade in the foreground standing alongside her young children defied all understandings of normal motherhood. In one of the photos her son is clutching what looks like a mortar shell. At the time, Hamas replying to criticism for their hard-hearted and cynical use of a mother to kill and die, protested that the pictures revealed the depth of despair among Palestinian women and their strong desire to defeat the Israeli occupation.

Riyashi was the eighth Palestinian female suicide bomber. Following the attack of Darine Abu Aisha (the second Palestinian female suicide bomber), Sheikh Yassin, the spiritual leader of Hamas, withdrew his objection to using women in such actions and switched instead to lavish praise of their involvement. He applauded Riyashi's attack, urged other women to volunteer, and warned the Israelis to expect even more female bombers.

In many ways the Chechens and Palestinian female suicide bombers, and their supporters around the world endorsements of female involvement in terrorism, opened the doors for other female terrorists acting in behalf of conservative Islamic-related terrorists groups to join in. Following them, Al Qaeda sent white European Belgian Muriel Degaque--a wife, but not a mother--to bomb herself in Iraq, and al-Qaeda in Iraq also sent a rash of female bombers from inside Iraq to detonate themselves at various targets inside Iraq.

ISIS, thus far, has not sent females out to "martyr" themselves but has made signs of considering it. And it is now looking as if Tashfeen Malik may have been their first ISIS inspired volunteer for that dubious "honor".

Horrifically, three years after Riyashi bombed herself, Al-Aqsa TV, the official station of the Palestinian unity government (led by Hamas), began airing a fictionalized dramatization of Reem's four-year-old daughter following in her mother's footsteps. In it Duha Riyashi (played by a child actress) sings as her mother readies herself for a suicide bombing while asking in the sick lyrics of her song, "Mommy, what are you carrying in your arms instead of me?" Mourning her mother's death in the video, the young girl finds a leftover stick of dynamite near her mother's bedside table and picks it up as she vows to carry on, "My love will not be words. I will follow Mummy in her steps."

Clearly to these kinds of groups, fixated on winning at all costs, and engaging in terrorism to do it--mothers and children, and the bonds between them--mean nothing, compared to carrying out acts in behalf of the "cause".

It should also be noted, that Chechen suicide bombers--male and female--were encouraged by their ideologues to marry and have children before going on suicide missions. The logic was that they should fulfill all their "life duties," including having children before engaging on their fantasized and final trip to Paradise.

Chechens who are fighting in Syria (who according to our ISIS defector informants in our ISIS Defectors Interviews Project) head the battles as the elite ISIS forces--the Navy SEALs, if you will--of ISIS. They follow the slogan of "Victory or Paradise," meaning that death holds no sting and "martyrdom" is victory for them.

Indeed, if Tashfeen Malik and her husband Syed Farook were inspired by the plethora of sick, ISIS ideology that is presently on the Internet, or radicalized from more personal contact--their mindset would be the same. Death holds no sting and killing innocents is glorified.

We see evidence that the couple were preparing for what appears to be a series of attacks and were likely planning to carry them out much like the Tsarnaev's did--starting with one target and carrying on to a bloody fight at the end--ending in death for at least the elder "true believer."

However, it seems a workplace spat somehow triggered Syed Farook to decide to jump the gun and prematurely set into motion their series of attacks. That Syed went to work alone, got into an altercation, and then returned in battle gear with his wife to carry out his massacre--but that the couple "forgot" to bring their other bombs along to carry on as the Tsarnaev's did from one bomb site to the next ultimately ending in the elder Tsarnaev's death OR that they thought they could return for the other bombs seems to indicate they went off half cocked--perhaps out of nerves and anger.

Nevertheless, the couple was clearly not willing to surrender. When faced with overwhelming force--just like the Madrid train bombers, the Paris attackers and now them--they fought to the death and would likely have exploded themselves and others around them had they had their other devices along with them.

What this couple's story underlines is that despite our wish to see females as the gentler gender, females can be lethal terrorists, that terrorist groups and now even ISIS are more than willing to make use of them, and that mothers are not an exception. Sadly, we must face that for those that have drunk the poison Kool-Aid of the "martyrdom" ideology put out by such groups as al Qaeda and ISIS--that killing and dying for the "cause" overrides every other normal instinct--including that of self-preservation and maternal love.

That is the enemy we face today. We must do everything we can to discredit and destroy this ideology and the groups that espouse it.

Anne Speckhard, Ph.D. is Adjunct Associate Professor of Psychiatry at Georgetown University in the School of Medicine and Director of the International Center for the Study of Violent Extremism. She is author of Talking to Terrorists and coauthor of Undercover Jihadi. Her newly released book is Bride of ISIS. She has interviewed over four hundred terrorists, their family members and supporters in various parts of the world including Gaza, the West Bank, Chechnya, Iraq, Jordan and many countries in Europe. She was responsible for designing the psychological and Islamic challenge aspects of the Detainee Rehabilitation Program in Iraq to be applied to twenty thousand detainees and eight hundred juveniles. Website: www.AnneSpeckhard.com