Mothering is an uphill path as our children get older, so do we. We all reach different stages of development at the same time. It's an upward climb. 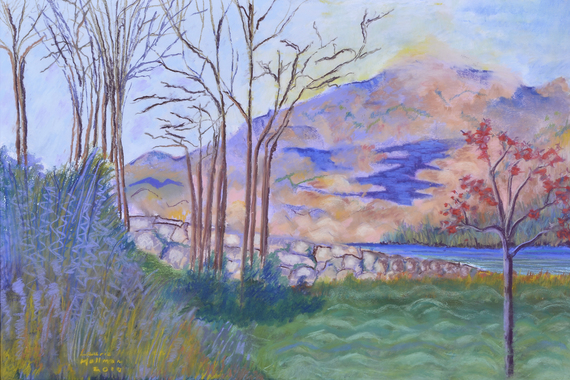 I remember in my late twenties being a new mother. Clueless, never having diapered a baby, nursing for the first time, I just fell innocently in love. I held my baby continuously without a thought to his development of independence or even self-soothing. I was an innocent.

Well-educated in many fields I had only focused on conceiving and then my pregnancy when it finally arrived seven months later.

I loved my pregnancy. I wanted the whole world to see me. Somehow, though previously fit and slim, getting bulbous didn't bother me. I gained thirty pounds and the doctor said that was fine because I was underweight to begin with. But, honestly it didn't bother me.

I had something inside to show off. That's simply how I felt. Unlike other times of my life, this wasn't about achievement, just developing life. I watched what I ate, didn't drink any wine, went to work, and obsessed about the prospective baby's room. I wasn't superstitious about buying everything ahead. I launched into what I now realize is a familiar pattern. Give me something new to learn and I'm off and efficient. So my pregnancy was taken in stride as I learned about each trimester, painted a room, bought a blue carpet (after going back and forth to stores over and over), bought a yellow crib and waited. I didn't know the sex of the baby ahead.

For some uncanny reason, I didn't think about how to take care of a baby ahead of time. I guess if I gave it any thought, I figured I'd learn. My labor was unexpectedly rather horrendous. About 20 hours. But my doctor was as determined as I to keep to my vow for natural childbirth and I just watched the clock as each labor movement passed. I heard so many babies being born waiting for my turn. Finally, it happened. 7 lbs 14 oz.my baby boy delivered himself to the world quietly. He wasn't a screamer.

I nursed with difficulty, learned to diaper and bathe my son and spent endless hours cuddling and feeding him. Nothing else matter. Frankly, everyone else was ignored. My mountain contained my son and me.

Today I know this insular feeling with your newborn is natural. Educated later I learned it's considered a kind of positive healthy pattern where you and your baby almost symbiotically attach to each other at everyone else's expense.

When I wanted to get pregnant again, I asked my doctor for a referral to a more sophisticated hospital than my local rather rural one where I could have rooming in. He was visibly disappointed but when I got home twenty minutes later my phone was ringing. He said if I wanted rooming in, then the hospital would just have to provide it. Amazingly enough, he arranged a special room just for me and my baby with all the state requirements for a baby in a room, not a nursery. Today this is common, but not back then. This was the most remarkable relationship with my doctor.

Amazingly, this is forty years ago. My first son and I went on many pathways up our mountain as I introduced his brother rather dramatically. Carrying my first baby across a busy street when he was two, we fell and I broke my foot. He was fine, but I was a sight! In a cast I went to the hospital for my second long labor. Right on course about 20 hours later, my second son was born. Now I was more of a pro. I nursed easily, learned about diapering and bathing once again in the hospital because I had rooming in where i could get to know him before I went home.

Then came the joys and struggles of sharing my attention, returning to work, advancing my education. The mountain was high with dips and valleys but always reaching upward. I look down now at my 40 and 38 year old babies turned into strong fascinating men and I'll never look back with any misgivings. I was meant to be a mother. I was meant to climb a mountain.

Laurie Hollman, Ph.D. is a psychoanalyst, painter and author. Her recent book, Unlocking Parental Intelligence is on sale at Amazon, Barnes and Noble and wherever books are sold.