By the time I was aware of things, my mother, Concepcion Cuenco Manguerra, had shed her Carnival-Queen ways, mostly because of circumstances - marriage, children, World War II, and my father's death - one could not be frivolous under those conditions. But at nineteen, she had been a beauty queen - Cebu's Carnival Petit Queen of 1931 - a title that, at least in the Philippines, conjures glamour, power, and the romantic notion of a bygone era. 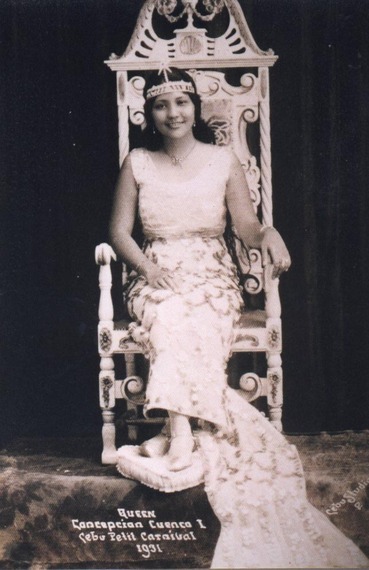 In our ancestral house in Cebu, Philippines, the picture of her as Carnival Queen sat on top of our piano. It was encased in an elaborate antique brass frame, and although the picture had faded so the colors were dominated by sepia and brown, I could still discern my mother's face - round, youthful, with a fresh smile, with some coyness in her expression. She looked alien to me. By the time I paid attention to this picture, my father had died and my mother had surrendered the persona of "Beauty Queen" for "Widow." For the rest of her life, she referred to herself as the "pobreng viuda" - the poor widow - words that sometimes evoked mirthful giggles from her four children who knew her well. Despite her martyr-expression and sighs, we were well aware that she was a tough woman and entrepreneur.

My mother was born February 18, 1912, in Cebu City and she grew up in the historic Parian District. She told me stories, especially in her later years, and she used to say that the family home in Colon Street was chaotic and noisy. The men were always arguing; and the printing press shook the entire house. The men she referred to were: Mariano Jesus (her father who later became Senate President), Jose Maria (her uncle who later became Archbishop of Jaro), and Miguel (who became a Representative). And the printing press was the Imprenta Rosario, started by my great-grandfather Mariano Albao Cuenco and later managed by his young wife Remedios upon his death.

Aside from having a passion for the written word, my mother's family also had political aspirations. Right around the time of my mother's birth, my grandfather (Mariano Jesus Cuenco) embarked on a political career, first as an assemblyman, then governor, senator, cabinet member, and at the highest point of his career, senate president.

My grandfather, Mariano Jesus Cuenco, was governor of Cebu when my mother became Carnival Queen in 1931. The karnabal, or carnival, which had its roots during the American rule in the Philippines, started as a series of trade fairs. Part of the festival activities included selecting a queen and her court, a tradition that captured the imagination of the public and which quickly dominated the annual trade fairs. Cebu, like Manila, had its own carnivals. Cebu hired the company of Churchill and Tait, which provided a circus, animal shows, and thrill rides. Festivities went on for fifteen days, during which time the candidates for queen participated in various public events. Coronation night was the culminating point of the entire carnival. 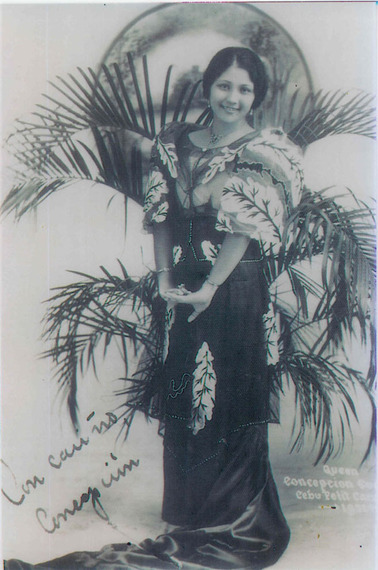 I have no doubt that being a Carnival Queen was one of the happiest moments of my mother's life. Surprisingly she didn't talk much about it. She was too busy being a wife and mother, and after my father died, was overwhelmed at being responsible for four children. The only reminder in our household that she had been Carnival Queen was that solitary picture on the piano. I learned about her "beauty queen status" from other people who decades later still marveled over her coronation. They talked about my mother's fabulous gowns, in particular a mermaid outfit decorated with large coins, and made by a Spanish couturier. There too was Mama's handsome coronation consort; and people always clucked over their thwarted romance. People regretted that most pictures of my mother as Carnival Queen had been destroyed during World War II.

It was not until I was a grown woman that my mother talked to me about those carnival days. Sometimes, she mentioned her handsome consort. Apparently he had kept a huge picture of himself and my mother hanging in his living room until his daughter took the picture down. "I saw him at the dentist, and he begged me for a copy of that picture," my mother related. "I told him, 'Don't be silly, that was so long ago.'" But in her face I saw a glimmer of that nineteen-year-old, and I could imagine again her headiness at being young, the beautiful daughter of the governor, and being Carnival Queen.

In her ninety years of life, my mother did many things and accomplished much. She became a real estate tycoon; she loved her children and grandchildren; she enjoyed travel; she loved home-cooked Cebuano meals; she liked movies ("Pretty Woman" was a favorite); and she had many friends from all walks of life.

When she was no longer young, my mother enjoyed being the queen of various service groups, and we have numerous pictures of her wearing ternos (Filipino gowns) and with a crown on her head. Music and dancing was something of a passion. Before dance instructors became fashionable, she already had dance instructors. Even when she was deep in her eighties, she moved and twirled so gracefully. No matter how chaotic her life was, there was always some serenity in her when she was on the dance floor.

Reflecting on it, perhaps while dancing my mother imagined herself as the nineteen-year-old Carnival Queen once again, when things seemed perfect, when Life had not yet touched her. For indeed Life had much to offer my mother, with its ups and downs, and pains and joys, but while she was Carnival Queen, even for just a short while, Life was good. 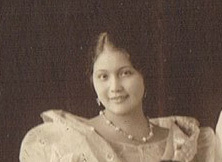 (My mother, Concepcion Cuenco Manguerra passed away on December 1, 2002, in Makati, Manila. I still miss her and am remembering her this Mother's Day.) 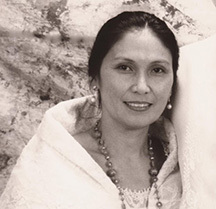 ~~
The pictures show Concepcion Cuenco when she was nineteen. The last picture shows her youngest daughter and author of this article, Cecilia Manguerra Brainard.