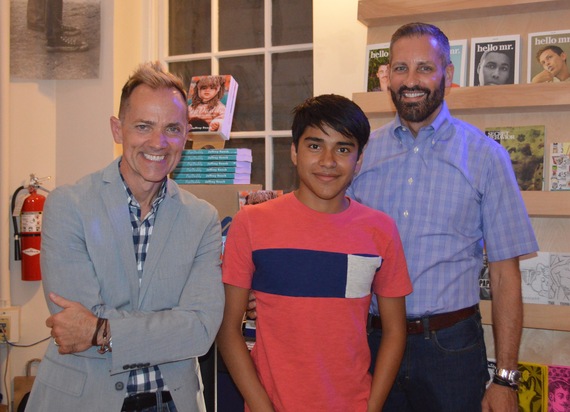 It's hard for me to take a holiday seriously if it's not connected to a day off from work. Or, worse yet, if it arbitrarily excludes people who don't meet the criteria being celebrated. Not in love with someone? No Valentine's candy for you asshole. And yet I always find myself celebrating Mother's Day and Father's Day. But for very different reasons.

As strange as it sounds in a household made up of men, it's Mother's Day that my husband and I have always put the most effort into. Especially when our son was younger. There were always activities at school leading up to Mother's Day and we didn't want him to feel excluded. Or maybe it was ourselves we were protecting, doing everything we could to avoid hearing Jackson say that he wanted a mom too.

For years we invited our moms or sisters to spend time with us mid-May and act as our surrogates. As Jackson has gotten older, the holiday has gotten less and less important to him, which is too bad. There's something conceptually wonderful about celebrating those who have mothered us, but it's buried under greeting cards, flowers and a very literal interpretation of its namesake. It is Mother's Day after all, not Mothers' Day. If the point is to celebrate those who have nurtured, cared for and loved us unconditionally then sign me up. Manly or not, I've always gravitated toward that role in raising our son. If, however, a vagina is required, then I'm afraid I'm out of luck. Which leaves me with Father's Day.

I've never been able to get excited about Father's Day. Maybe it's the fact that it occurs in mid-June. School is out, summer is shifting into high gear and I want to be doing things. The idea of a do nothing day isn't very appealing. Or maybe it's because I've never needed the excuse of a holiday to do nothing. My husband Ken and I have an agreement that when one of us needs a break from parenting, we take it. I've sent Jackson and Ken off to a concert, a movie or an art fair on their own more times than I can count. Likewise, I've been happy to face the prospect of an endless Sunday alone, spent on an unyielding metal bench, while Jackson spends 30 seconds at a time gliding up and down the length of some pool or another.

Or maybe it's a deep-rooted fear that I'm not particularly good at fathering. Ken is the protector, the one who pushes our son to be a better version of himself, who balances discipline with fun. I acquiesce. Yield. Doesn't my husband deserve to be celebrated on Father's Day? Not to mention everyone we know thinks we deserve double the attention on Father's Day, so whether we like it or not, we celebrate it. But it bugs me that we are trapped by these old-fashioned notions of gender roles.

Which brings me back to the beginning -- maybe the Days have outlived their usefulness. Do moms and dads still need an official day in order to feel appreciated? Is one day out of 365 enough to express how much a parent is appreciated? I mentioned this very thing to a group of women at a book club meeting the other night and they told me in no uncertain terms to shut the hell up. They needed Mother's Day. Point taken, but can we at least move it to a Monday? And maybe get the day off from work? Oh, and can we move Father's Day to a winter month? And how about Dad's Day instead? It has some nice alliteration and loses the creepy Darth Vader vibe. No? I didn't think so, but I figured it wouldn't hurt to ask. Oh well, I guess I'll keep right on celebrating along with the rest of you. Happy Father's Day everyone.