It hasn't been a great week for moving the American environmental agenda forward. On Thursday, the Republican members of the Senate Committee on Environment and Public Works decided to boycott the vote on Gina McCarthy's nomination.

However, on a positive note, the Safe Climate Caucus, chaired by Rep. Henry Waxman (D-CA), has been actively engaged in raising the consciousness of the American electorate about the threat of global warming.

I reached out to several of the female members of the caucus, on the occasion of Mother's Day, to get their feedback on the importance of amplifying the dangers of climate change, and the role of mothers, grandmothers, and aunts in being vigilant about protecting the planet.
Below are their responses via e-mail:

"Climate change is real and has been ignored for far too long. Our rapidly changing climate is having visibly profound impacts and will continue to do so unless we act now. As a member of Congress, a mother and a grandmother, I am extremely concerned about the negative health and environmental consequences our inaction will have on current and future generations.

Mothers have a unique perspective and strength that can be channeled to be a voice for these generations, as they witness first-hand the effects these consequences have on their children, and their friends' children. I am working with my colleagues in Congress to raise awareness and implement responsible policies to address climate change, and I believe that working together it's not too late to ensure a sustainable future for generations to come."

"I joined the Safe Climate Caucus because climate change is a threat and we must engage Republicans on the science of this issue. As a mother, I am even more concerned with the environment we leave our children. We know children are particularly vulnerable to diseases such as asthma, water born bacteria, and other respiratory illnesses. We are doing them a disservice now and in the future by not addressing climate change. I will continue working with my colleagues in the Caucus to find solutions that reduce our consumption of fossil fuels and [that] invest in green technologies."

"Mother's Day is a perfect reminder about the power of mothers and women in the fight for climate change. Fighting to keep our environment clean and cared for is everyone's job, but it's so often mothers who care for their children with asthma and feel the effects so closely. In my district, Oakland has some of the highest rates of asthma in the country. Those mothers know that for communities of color and for the next generation, we've got to solve the climate crisis now. There's no time to waste."

"All parents care about the world left to our children. Over and over again we see the terrible impact climate change has on our world. We are at the brink--and some say past the brink--of being unable to take action to reverse the effects of climate change, which is why action now is crucial.

Around the world women have a disproportionate role in providing food, water, and energy to their families. These needs are inextricably tied to our climate and environment. That means the recurrence and rapidity of natural disasters can severely disadvantage women and have a terrible impact on women's day-to-day lives.

I joined the Safe Climate Caucus and signed on to my colleague's [Rep. Barbara Lee] resolution about Women and Climate Change because this is a critical issue for our country to tackle.

Mother's Day is a wonderful time to mobilize and raise awareness on the issue." 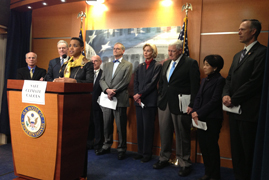