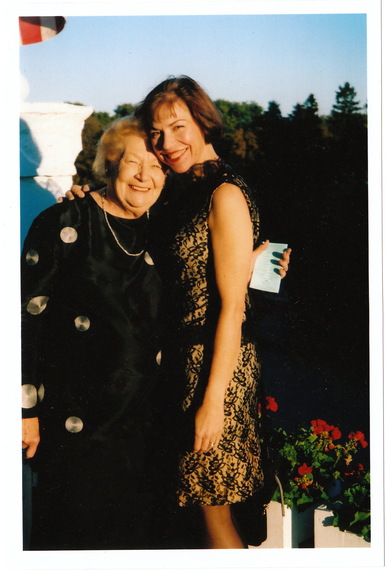 I often hear people say they wish they'd visited their mothers more, or been more generous with the "I love you's." But I don't think I disappointed on those scores. Mama-daughter drama? None. So why, then, do a bouquet of regrets still bloom in my heart, the older I get and the more Mother's Days I spend without her?

It's all the things that hindsight makes clear:

I wish, for example, that I'd spoken to her in a louder voice, and more directly, at busy family dinners. Now that my own hearing is kind of sketchy -- like if the dishwasher is running and a kid asks me a question from the next room, forget it! -- I realize how much of the conversation she missed, later in her life, as we all yammered obliviously around her.

I wish I'd bought her beautiful, high-quality wool and cashmere. Skeins of yarn and knitting needles were to her like paintbrushes and chisels to Michelangelo. But the bargain-bin acrylics she used for her masterpieces didn't last. With better materials, her children and grandchildren would have more wearable mementoes today.

I wish my sisters and I had hit on the idea of our mother-daughter weekends years earlier. To celebrate Mom's 75th birthday, we converged from four different states to Michigan's Mackinac Island for a pampering holiday at the Grand Hotel. The place represented the essence of fancy for a middle-class Detroit housewife who'd raised five kids. Our dress-up dinners, Scrabble marathons, and, mostly, stolen time together kept us going back for six birthdays in a row afterward.

I wish I'd given her symphony tickets and restaurant gift certificates as gifts -- experiences she loved but would never seek out for herself -- rather than the bathrobes, perfume, jewelry, and other pretty junk she didn't need.

I wish, oh lordy I wish, I hadn't been such a killjoy about her evening Chardonnay. "You'd lose weight more easily if you didn't drink that," I'd harp. This was before I moved to California and discovered the pleasures of a glass (or two) of pinot with dinner. This is when I was deep in my righteous phase of taking out my own unhappiness on everybody else.

I wish I'd insisted she get second opinions because her doctor was almost as old as my parents and full of dubious advice. Better, I wish I'd been proactive and found her a "second opinion," and made the appointment, instead of just frowning and leaving it to her.

I wish I'd paid attention when she wanted to teach me to sew, recover a chair cushion, or make pasties (meat pies from Upper Michigan, where my dad grew up). I never thought I'd give a hoot.

I wish I'd known then what I know now about how stressful it was for her to be the main caregiver for someone with dementia. While Mom struggled first with her own mother and then with my dad, I could have spelled her more, lined up resources. I should have asked not just how they were doing but how she was holding up.

I wish I'd told her I was leaving my husband. Alas, I didn't know it myself, during her lifetime. That came a year later. But the news would have made her very happy, I've since learned from her best friends. (Moms see everything, even when they don't say a word.)

I really wish I talked to her more directly about what she was experiencing while she was dying. She'd signed herself into home hospice after the recurrence of cancer that was discovered after Thanksgiving proved rampant and untreatable. She was gone before Christmas. During those shell-shocked weeks, we played Scrabble. We watched football on TV. I watched her do crosswords, sipping coffee I'd secretly laced with morphine, for the pain, which she'd stoically refused. But I hadn't been brave enough to ask her things like, "How do you feel...no, really?" "What do you think about what the doctor said?" "Are you scared?"

My motherless Mother's Days also fill me with other regrets. But these are fueled not by hindsight but by grief. I wish of course she'd been there to see me carry her rosary at the joy-fest that was my second wedding, where she could have mingled with our entire families, and reveled in finally seeing the peace on my face. I wish that her first grandson might have serenaded her on his classical guitar, and that she'd seen her namesake granddaughter thrive at college.

I wish that this Mother's Day, she could be sitting on my back patio in the California sun with my younger daughters and her new-and-improved son-in-law (whom she would have adored and who would have made her feel welcome, always), all of us raising a glass to her, a toast to a woman who always deserved a little more.

Sometimes I can just picture it.