I grew up dreaming of becoming a mom; I've always loved children. I did not grow up dreaming of being a mom of a child with disabilities. Then my firstborn, Max, had a stroke at birth. Doctors told us he was at risk for severe cognitive impairment, not walking or talking, and vision and hearing problems. My husband and I were shocked (babies can have strokes?!) and devastated. Dave bounced back; my depression lasted for months.

One evening, I lay in bed under the covers, sobbing. Dave walked over, holding Max. "This is my worst nightmare," I said. "Honey, look at him. Does he look like a nightmare? He's beautiful," Dave said. 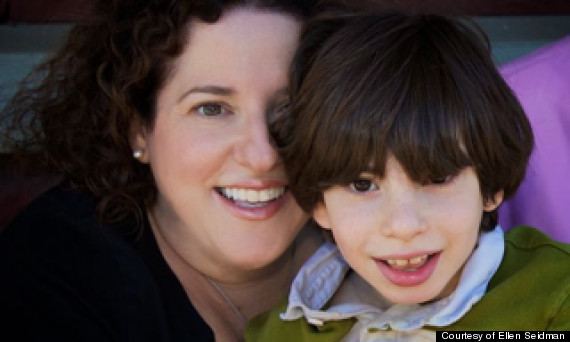 He was right: Max was, and still is, beautiful. At 9, he's got mild cerebral palsy along with a sunny personality, a great sense of humor, plenty of smarts and dogged determination. To me, he's just a great kid, not a kid with special needs. We've both developed a lot in the years since he was born. What I've learned along the way:

Perfection is in the eye of the beholder.
Some people might look at my son and see a child who walks a little unsteadily at times, speaks unclearly and has trouble grasping things. Me, I see a child who miraculously walks, talks in his own way and does his best to make his hands work even though they're often tight from the CP. I see the ability in his disabilities. I see Max, a child as perfect as any other--and, at times, as bratty as any other. (Hello: He's a kid with special needs, not a saint.)

There is no race.
When Max was an infant, I got a weekly email newsletter about baby milestones. I'd read it hungrily when it hit my in-box, then feel dejected when Max lagged behind. One day, I finally hit "unsubscribe." Then I tossed the What To Expect books. Max was going to do things on his own timeline, and nobody else's--true whether or not your kid has a diagnosis. If you suspect your child has delays, talk with your pediatrician. If he needs therapies, get him them. But don't get caught up in the milestone game.

Inchstones are worth celebrating, too.
Max has taught me to appreciate life's little triumphs; it's carried over to how I treat his sis, Sabrina, two years his junior. At our house, small successes are a major reason to rejoice. Sabrina aced her weekly spelling test? Bring on the hot-fudge sundaes! Max learned how to speak a new word? Time for a happy dance (yes, we literally do them and yes, they could be used as blackmail against me). These woo-hoo! moments are a way to build up kids' confidence, a regular reminder of how much they rock... and a fine reason for mocha chocolate chip.

Kids with special needs deserve parity, not pity.
I've grown used to the pity stare Max or I sometimes get from other parents. I'm accustomed to explaining Max to kids who gape. It hasn't always been that way; I used to get defensive and worked up. But I've realized that as Max's mom, it's my job (and privilege!) to help people understand that in many ways, he's just like any other kid--and that although he has some differences, he's still a kid. When kids ask "Why is he drooling?" I'll patiently explain that it's because his mouth doesn't close all the way. And then I'll tell them his favorite movie is Cars 2, and ask what theirs is. When parents at the playground stare, I'll start the conversation and tell them that Max would really like it if their kids played with him. I do my best to bridge the gap--and hope that people will look past Max's special needs and try to get to know the kid inside

Starbucks therapy works.
So does Zumba therapy. And mani-pedi therapy. And girls'-night-out therapy. And neck-massage-oooh-yes-honey-right-there therapy. As parents, we often fall last on our to-do lists--why it's particularly key to have treats and time outs and not feel guilty. You don't just deserve them, you need them. (Particularly the frap with a double shot of espresso).

You can't always be in control.
After Max was born, more than anything I wanted to know what he'd be like. I spent my maternity leave taking him to doctor after doctor, determined to find an answer. Most said the same thing: His future was unknown, get him therapy up the wazoo (the technical term). Finally, I visited a big-deal neonatologist who's a cousin of a friend. I held Max in my lap as he poked and prodded him. He asked lots of questions. And then he said, "His future looks ominous." I burst into tears. "Nobody's told you that?" he asked, incredulously. Actually, no. Nobody had ever dared say anything as bleak as that. It was an answer, all right, but one that to this day makes my chest tight when I think about it. I learned a hard lesson from Dr. Doom: Some things are not within your control. Accept that, focus on what is possible and you'll spare yourself a lot of heartache.

Savor the cuteness.
One of my biggest regrets in life is that back when Max was little, I'd get so caught up in worry about him and the craziness of being a working mom that I sometimes neglected to relish his roly-poly deliciousness. One of my most prized photos is from the afternoon I dressed him up in a ridiculous sailor suit we'd gotten as a gift, propped him up on our bed and take a bazillion shots. Do the photo shoots. Gaze in awe at the pudgy hands. Cuddle, cuddle, cuddle.

"Retard" is a really suck-y word.
In the past few years, I've spoken out about the word "retard" and how it demeans kids and adults with intellectual disabilities. Even when it's used jokingly, it perpetuates the idea that those with cognitive impairment are stupid, pathetic or worse. Some people have argued with me about it. The video I recently made to raise awareness, Would You Call My Child A Retard?, attracted a bunch of seriously cruel comments. You know what? I don't care. I'm going to keep speaking out against a word that hurts my kid, whether or not it's said to his face. I'm going to do anything I can to help him get along in this world. And if you fight me on it, you've got an empathy disability.

We parents are our kids' best advocates.
Over the years, I have done mighty battle with insurance companies to pay for Max's physical, occupational and speech therapies--and won. I persuaded our school district to fund a $2000 communication device that spoke words for Max (now he uses an iPad and a speech app, the Proloquo2Go). Once, I talked my way into a next-day appointment with a specialist who supposedly had no open spots for six months. I'm shameless about getting Max the help he needs. I am his advocate, fan club, coach, cheerleader, spokesperson, publicist and guardian angel, all rolled up into one yoga-panted mom.

Read more from Ellen Seidman at Love That Max.