My paternal grandmother, Edith Harper, died a year ago today: Mother's Day, 2012. She worked full time to raise seven children. Her greatest pride was putting good, wholesome food on the table for her family. My maternal grandmother, Elizabeth Cosser, lived close to the land, the daughter of a long line of organic farmers. As a midwife and district nurse, she helped facilitate the birth of new life and then supported mothers and children with her nursing skills. My grandmothers' prime working years came at the time of Victory Gardens, when it was patriotic to respect food, when the land was respected and waste was zero. This generation of women venerated the production and preparation of food, and their knowledge became part of the folk wisdom of home and hearth we celebrate today. 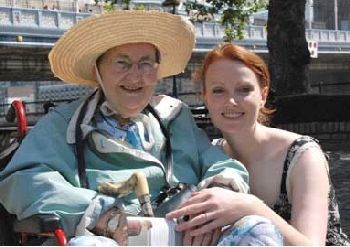 More than a century ago, in a movement spurred by the mothers and grandmothers of the time, the United States gave birth to the Pure Food Movement which intended to protect children and families from the adulteration of food products. This was a time when food was starting to be processed, production was fragmented, and rules and protections did not exist.

Women spurred the effort for reform and regulation, standards and labeling, joined by honest producers and food processors whose exports were threatened due to the activities of more unscrupulous food manufacturers and their undeclared adulterated ingredients. Decades of work by this powerful social movement resulted in 200 pieces of legislation culminating in the 1906 Pure Food and Drug Act, which ultimately led to the creation of the Food and Drug Administration under President Franklin Roosevelt in 1930. Exactly one hundred years ago, in 1913, the Gould Amendment, a food ingredient labeling law was passed.

The Pure Food Movement was born out of food safety concerns, recognizing corporations were putting ingredients into food which were not wholesome. While milk and meat were prime suspects in food-related illnesses, the substance of food had not radically changed, food was food. Suspect ingredients were detected, called out and eventually eliminated. Today the substance of food has been altered so dramatically the greater debate is what constitutes food and if it is changed substantively, is "food" safe?

Today, the industrialization of agriculture has put us at war with nature. The corporate mentality of domination over the land has changed the way we live and the way we look at food. Cramming more and more animals into smaller and smaller spaces and the increased use of chemicals and pharmaceuticals adversely affects our health and that of the air, the water and the land.

Instead of sustainability, industrial agriculture has become synonymous with the destruction of the natural environment and the adulteration of our food supply. Corporate agriculture encourages people to blindly accept genetic engineering, over promising nutrient content, yield and productivity while underplaying the essentially toxic nature of GMO crops: "Eat your genetically engineered corn, soaked in herbicides and inbred with insecticides."

This week the House and the Senate will be marking up the Farm Bill, which sets agriculture policy. However perhaps it would be more accurately named the "Food Bill" as it addresses nutrition programs and food safety, as well as environmental rules and regulations. There are those industry interests who are pushing for this trillion dollar legislation to override all environmental and safety protections which have been put in place around genetically engineered crops, further disfiguring the face of American agriculture while closing international markets to U.S. farmers.

Many countries understand that there is no conclusive evidence that GMOs are safe so exercise the precautionary principle. When U.S. rice was contaminated with an experimental genetically engineered strain called Liberty Link, all rice exports from the U.S. were halted to Europe and Japan. Hundreds of farmers suffered losses exceeding a billion dollars and many were driven out of business. Congress's response to this economic devastation was a letter encouraging the U.S. Trade Representative to dismantle the health and safety protections other nations have in place.

Today's food movement challenges this dismal system of corporate agriculture by embracing peaceable agricultural policies which are in harmony with the natural world, expressed in sustainable, local, whole food systems that work with nature, respect the land, preserve the soil, conserve water, protect the air, and is therefore attuned to the conservation wisdom of the ages, which came to us directly from our mothers, grandmothers and great grandmothers.

This Mother's Day, let us remember mothers and women who understood the patriotic nature of standing up for wholesome food, of standing up for the health of young children who would become our future. As we remember, we as women recognize our responsibility to stand up to help each other stand in our own power to both demand and co-create a sustainable wholesome food system.

This Mother's Day, let us remember the women who stood up and called the county to action over 100 years ago and let us take up their tradition by rededicating ourselves to the rebirth of the Food Movement.