There are times in my life when motivational speakers bum me out. When things are going well, I believe them. I think they rock. But then tough times come, and I tend to see them as false prophets.

As a teenager, I loved motivational speakers for three weeks out of the month. The other week I tended to be drawn more towards serial killers.

During one of those good weeks, I went to see Jesse Jackson. I sat in a coliseum with thousands of other kids and found myself screaming "Down with dope! Up with hope!"

I stayed inspired for approximately 41 minutes, at which point I tripped on the way to the school bus and twisted my ankle. I became confused about my motivational future. Now I needed the dope, so I wasn't sure how much that would screw up my hope. Thus ended my first official date with motivation.

What nobody told me when I was young is that motivation is conditional. Life has its ups and downs, and sometimes my deepest, darkest valleys have been more important to my growth than my mountain-top moments.

So I'm not sure that I believe people who jump around on stage and declare that they are always "fired-up, happy, enthusiastic, just because they choose to be!"

Because life should have its ups and downs, otherwise there's no spring-back when the bad times come. There's only the sound of a rigid belief being shattered.

When your body is without wrinkles and blooming on a daily basis and people stare at you and clothes hang on you adoringly, motivation is easy.

But then you get married and have young children. Your belly is loose from being stretched out and pommeled by your little blessing, and you age about ten years before you get out of labor and delivery.

After giving birth to my kids, I developed a resentment of motivational speakers.

One day, I had just cleaned up a diaper that technically required a hazmat team, and had tripped over a small car left on the floor by my two-year old who then knocked over my favorite lamp with the football helmet he refused to take off of his head. As I passed by the television, I heard Robert Schuller on a morning show say that I should turn "scars into stars." I threw a stuffed Barney at the television and left the room.

I'd send him a picture of my episiotomy scar and see what star he might fashion from that puppy.

When I was in my thirties, my motivation died a slow death, strangled by Kool-Aid and Raffi.

But as my kids grew, and life stopped being sticky, I felt my desire for motivation coming back. I hit my forties and was no longer tired. Work was going well. I watched a clip of Tony Robbins and thought, "Wow, he IS right. I could have unlimited power!"

I felt that I was back in the game, and my scars WERE turning into stars.

Then I was clipped by my fifties and menopause. Chop block. Motivation down.

To try and adapt to the situation, my motivational heroes have changed. Rather than being inspired by Mark Zuckerberg, I am desperately reaching for the wonderful story of Colonel Sanders who didn't start his chicken business until he was in his sixties.

Or Grandma Moses, who started painting at the age of 78.

Or Yoda, who is fictitious but is also small, wrinkled, green, very old, and successful at the box office.

Age brings with it a reluctant wisdom which through the years has proven to bring peace to my soul but not much to the pocket. I have to admit, however, that with wisdom life is less frantic, and motivation comes faster.

Then a hot flash comes and it all goes to hell.

Since I can't reverse the aging process, and can't afford extensive plastic surgery, and am not about to start long-distance running, I've decided to work on my soul--which is ageless, by the way. In fact, I'd like to tell you that my soul is young, witty and eternally intelligent. She's going to get my time now.

So, if you want to motivate me, talk to the soul. Because we are going places, she and I. But we don't care too much about making millions or driving a BMW or wearing a lot of bling, because we've been there. Kind of. At least we had the BMW.

I'm going to work on wisdom by studying quotes from the greats, like Yoda who said:

I said I'm working on my wisdom. I didn't say I was good at it.

PHOTO GALLERY
What Do You No Longer Stress Over?: Health/Appearance Edition
Download
Calling all HuffPost superfans!
Sign up for membership to become a founding member and help shape HuffPost's next chapter
Join HuffPost
Follow Donna Highfill on Twitter: www.twitter.com/DonnaHighfill
Voting Made Easy
Register to vote and apply for an absentee ballot today
Register now

Why Motivational Speakers Depress Me
What Do You No Longer Stress Over?: Health/Appearance Edition 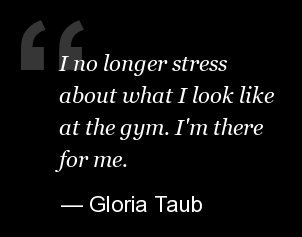