Three pickup artists who shoved their faces between women’s breasts in the name of charity were floored when an organization rejected their funds. And we can't imagine why.

Jason, Jesse and Kong caused a bit of stir online earlier this month when they set out to raise money for the Breast Cancer Research Foundation by publicly “motorboating” (rubbing their faces in women’s boobs and going “brrrr”).

For each woman who wittingly participated, the guys agreed to donate $20.

“We’re working on saving some boobies,” the group declared in the way only forever-frat boys can.

Altogether, the trio managed to collect $2,000.

But once they submitted the check, which came to $7,000 (that included the money they would’ve gotten for clicks from YouTube), the charity responded with a rejection letter. The Breast Cancer Research Foundation said that it couldn’t accept the donation due to the “sensitivities of the community we serve." 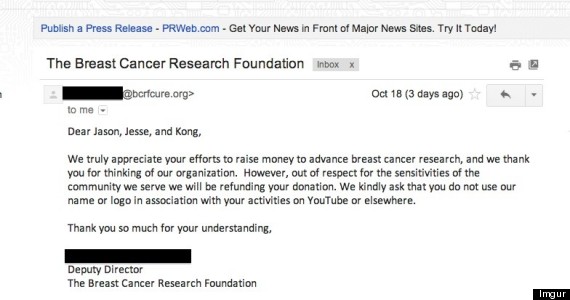 The pickup artist crew, apparently not used to rejection (or so they'd have us believe) did not take this graciously, pointing a finger at the "haters," in a YouTube video.

"It's obvious that they had to do this because they were getting pressured by a small minority of haters who thought that this video was 'offensive," one of the bros lamented. "So congratulations, haters. Breast cancer research literally just lost $7,000 because of your personal problems with this video."

But really, rejecting the donations likely had nothing to do with being a "hater."

Flat-out refusing to take a donation from a questionable source isn’t all that uncommon in the breast cancer charity community.

And Living Beyond Breast Cancer Foundation also said "No thanks" when Larry Flynt's Hustler Club in Vegas organized a topless skydiving fundraising event for the organization, the nonprofit told HuffPost via email.

The good news is that the motorboating gang has prompted conversation about other worthy causes. The debate has exploded on Reddit where some have offered earnest suggestions of donating at a local level and others have suggested the guys explore a cause related to prostate cancer.

They are looking for a willing charity recipient, and they’ve asked their viewers to share their thoughts as to whether they should go after another breast cancer charity or just offer up random acts of kindness to strangers.

Either way, the three bros say they remain undeterred.

“We promise to donate this money,” one pickup artist said, “and we will.”

Whether you're a hater or lover of motorboating, consider turning this ruckus into something positive by donating to the intended recipient, the Breast Cancer Research Foundation. And let us know your thoughts in the comments section below.