This story about John McCain is full of cringeworthy details about a man drenched in flop sweat, reduced to hitching rides with his supporters and missing events because the lowly commercial flights he takes were cancelled. Very "ghetto," Senator! But it says in the article, "He disputes that anything has changed."

A TALE OF TWO CHEESESTEAKS

It was seven summers ago when I lived in South Philadelphia. Yuz know, down Passyunk Avenue, by Pat's and Geno's, the rival cheesesteak "inventors"? The Republican National Convention was in town.

Now, if you've ever lived in Philadelphia, you know that anyone of note who passes through town has to have a photo op at Pat's or Geno's (I'm a Pat's man, myself. It was about 50 feet closer to my apartment.)

Bringing my groceries home one day some weeks earlier on my bike, I had seen a motorcade with a handful of cop cars and limos coming down 10th Street. They pulled up in front of Pat's and a cowboy-booted leg stretched out of one limo and it was Al Gore. Then Joe Lieberman got out of the other side of the limo. A crowd had gathered and it was novel enough for me to stand there for a couple of minutes and gawk.

So the week of the convention, I was walking by Pat's and there were a few cops standing around and a white stretch van was there. John McCain, (fresh from being booed at a speech at Penn, I later found out) just plopped out of the van and sat down alone at one of the benches and ate a cheesesteak while one photographer snapped a picture. Again I gawked for a minute, but it was super boring, so I left.

Now, Gore was vice president at the time, so he had a motorcade. McCain was just a senator; I don't think they're entitled (by the government) to street-blocking, police-escorted motorcades. But I don't know, and I wish I knew who gets them and how elaborate they are for different types of dignitaries.

A TALE OF TWO COMMUTES

Vice President Cheney and I sometimes see each other on our commute home from work. I hear him coming a mile away (lots of sirens), and I know it's him because who else that lives on Mass Ave. has a motorcade that size?

Bush's motorcade is bigger; I've seen it, too. Gunmen, ambulance, and all.

I don't really get the concept of drawing so much attention to someone you're trying to protect because they're so important to the nation. Wouldn't it be more effective and efficient for Cheney's motorcade to just be, like, a couple of armored SUVs, one for him and one for Satan? That would even still achieve the "shell game" effect that I've heard motorcades are supposed to accomplish, to confuse people about which vehicle contains the VIP.

Being somewhat new to D.C., I actually still get a kick out of seeing motorcades of all sizes, and trying to figure out who's in them, and what that says about the person's importance. "That one looks like it might be Condi's," I'll think to myself idly.

Me, I ride the bus, and it's not the Straight Talk Express, either. But remember, I'm a nobody.

It will be a while before I have a motorcade... even one of those little tiny ones where the siren is inside the tinted glass... or even a car. You'll spot me walking or riding a bike or taking public transit in the meantime. Or taking a cab, like I saw Virginia Gov. Tim Kaine doing as he left the Washington (Hinckley) Hilton last night. It was such a nice evening that I walked home from work, and that's how I saw him.

Oh, coming back to the point: Senator, get a motorcade, even if you have to put it on a credit card! And don't let that reporter from the AP anywhere near it, he's not doing you any favors. 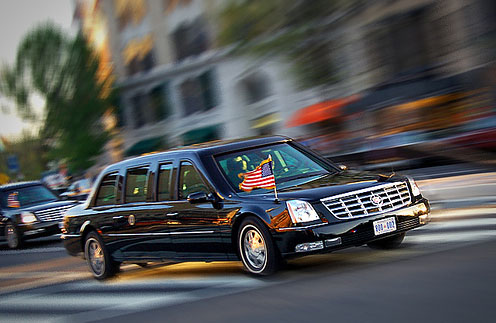