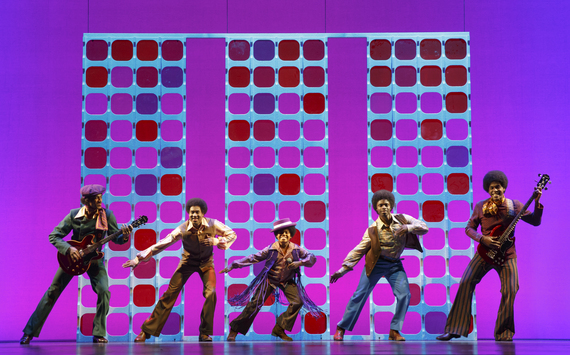 Some nights of theatre are pure magic. Whether it's the performance, the material, the audience, the theatre, a mix of all of the above, some nights are special and you know you're having a once-in-a-lifetime event.

So it was inside the Hollywood Pantages Theatre April 30th, 2015 as Motown: The Musical started its Los Angeles run. You see, Motown, the little independent label that changed music forever and launched some of the most brilliant careers in music, moved to Los Angeles and made it its home. And so did most of its stars. The Jacksons and their Encino compound, Diana Ross, Stevie Wonder, Smokey Robinson, Berry Gordy himself, they all called Los Angeles their home.

And so many of them turned out for one of the most star-studded nights of theatre Los Angeles has seen in some time. It was a premiere like the days of old, a red carpet, Hollywood Blvd., and lots of celebrities.

The musical is an excuse to weave hit after hit after hit in to one cohesive musical. It's the story of Motown, the label founded by Berry Gordy in Detroit, MI in January of 1959. And there we have the the two-edged sword: you see, there are two Motowns: Gordy's and the shine, the glitz, the soul, the stars; and then there's the stories of basically a tyrant, of exploitation, betrayal and loss. The play opens with the behind-the-scenes of the Motown 25 Special, you know the one where Michael Jackson became MICHAEL JACKSON with Billie Jean? Where Diana, the Supremes and others all came back. For Gordy. Who didn't want to go because all he saw were people that left.

But what the play reminds everyone is about the music. Motown came around when America was less than two generations old. In the late 1950s, we weren't even 200 years old yet, so it is as much a folk music, a form of cultural heritage as anything else in America. And the songs still resonate, a testament to the caliber of writers and artists making the music. And while there's story after story of songwriters not paid, the most famous being the hitmakers Holland-Dozier-Holland (HDH) eventually suing, and then dropping the suit, against Motown for millions of past revenues. But that's the business of music; it's not the music. 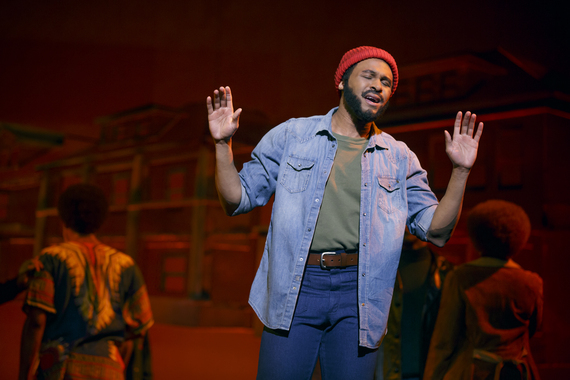 Opening night, I kept thinking of the nerves of the performers for this particular show. So many of the people portrayed on stage were sitting right in front, looking back at their doppelgängers; it had to be unnerving at times. Did Julius Thomas III wonder what the real Mr. Gordy was thinking as he portrayed the mogul? While I'm sure they've met, this night was special. Thomas was great as Gordy, almost too young. You see, Gordy was in his thirties by the time I was born, and I'm 52. There were moments when Thomas said he thought of the acts as his children where I thought he would have had them at age 12. But suspended disbelief is what theatre is about, so we go with it.

Allison Semmes as Diana Ross gives us a "Reach Out And Touch" moment and what an icon Ross is: her signature song where the audience holds hands, she comes out, sings, greets the crowd, Semmes did all of that and one look at the Hollywood Pantages Theatre and it looked, sounded and felt like a Ross concert. 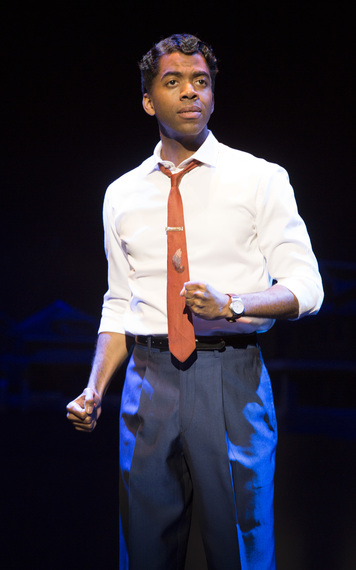 But it wasn't. That's another thing the play reveals. That as good as Thomas, Semmes, Jesse Nager as Smokey Robinson (it appears the one or two most loyal people in Gordy's life), Jarran Muse as Marvin Gaye... they all turn in great performances, yet it made me miss the originals so very much. I miss Marvin Gaye, and don't get me started on Michael Jackson. And I have seen DIana Ross, over 20 times live, and there's a spark, a certain something, that thing that Gordy saw and marketed and we all loved. These stage actors, as great as they are, are a reflection of endearing and important musical icons. It was great to hear a Stevie Wonder on stage, but the real one is still an incredible thing to enjoy as well. Watching Nager do Robinson was great, but Smokey was right behind me during the play and I wanted to hear him sing the songs!

Gordy had the business sense and the vision. The artists had the talent to make them legends. The ingredients combined to make a musical experience like no other, one that changed America and music worldwide. The only real winners were and are we, the people, who get to enjoy the music without knowing, or having to deal with, all the drama behind it.

And that's why Motown: The Musical works so very well. While the drama is touched upon for that very reason, dramatic purposes in the play, no scene ever tries to take away what the play is all about, the Motown Sound.

If you've been alive longer than say 20 years and are a fan of some of the best music ever made, there's no way that Motown: The Musical could be a bad time. It runs through June 7th at the Hollywood Pantages Theatre. It then goes to San Diego, back to the Segestrom Arts in Costa Mesa, then off to Milwaukee, Memphis and countless cities. Gordy is back on the road, his music is back on the road, his sound is back on the radio and taking theatre by storm.

Love him, hate him, there's no denying what he and a group of dedicated people did and how the world is actually better for it. Thank you, Mr. Gordy, from a fan of what you created. I can't imagine my life without Diana, Stevie, Smokey, Marvin, Martha, Teena Marie, Rick James, The Commodores, Tito, Randy, Jermaine, Jackie and of course, perhaps the biggest Motown star of all, Michael Jackson (who subsequently had his biggest hits on CBS records). While the artists may have left in many ways, they could never leave. What they did with Gordy at Motown was permanent, and as the play proves, was historic.

To hear the daily Karel Cast get the Karel Cast , subscribe in iTunes to the Podcast or simply go to the most incredible website on all the planet, save this one, karel.media.