What's it like to stare into the roiling mouth of an active volcano? Pretty darn cool, say scientists who work at Antarctica's Mount Erebus, home of one of Earth's only long-lived lava lakes.

But it's what's happening underneath that glowing, molten rock that is of even greater interest, and new research is offering intriguing answers to what lies beneath the lake.

For the first time, scientists have gotten a glimpse of the rocky plumbing inside the volcano. These geological conduits that pipe molten rock and gas from deep inside the Earth to the lava lake atop the imposing, 12,500-foot (3,800-meter) peak can be seen in a new video.

It's the first time seismic interferometry, an imaging technique developed in the last few decades, has been used to peer into a volcano's inner workings, said Julien Chaput, a Ph.D. candidate at New Mexico Tech, and the scientist who led the research, published in the April 14 edition of the journal Geophysical Research Letters.

"It was a crazy afterthought that we'd try this thing and see if it worked on the volcano," Chaput said. During the 2007 to 2008 Antarctic field season, a research team had set up more than 90 seismic stations around the upper portions of the mountain for a different experiment, and they decided to try the novel imaging technique as an added bonus. "It worked quite well, so we got lucky," Chaput told OurAmazingPlanet.  [Images: The Majestic Transantarctic Mountains]

The images revealed that, as many scientists suspected, Mount Erebus's insides are a honeycomb of interconnected pipes and magma chambers that twist and turn through the mountain.

"People have always thought there was this really crazy, tilted conduit system," Chaput said. His research appears to confirm that. It revealed at least two sets of geological piping directly below the lava lake, heading in different directions. One is at an angle of about 15 degrees — almost sideways.

"We managed to highlight that volcanic systems are extremely complicated," Chaput said. The work identified many shallow structures inside the mountain that contain pools of magma, but the largest magma chamber, which could be more than 3,000 feet (900 m) across, lies about 4,000 feet (1,200 m) below the summit.

The novel process used in the research offers tantalizing prospects for monitoring other volcanoes — particularly those that threaten more than just penguins and a handful of Antarctic researchers. Chaput said it could be very useful for imaging the innards of volcanoes in the Cascades Mountains of the Pacific Northwest.

Seismic interferometry uses a handy, natural tool — essentially the volcano's own burps — as the ink, and seismic stations as the paper to make images of the mountain's insides.

Anytime a large enough gas bubble muscles its way through the volcano's plumbing, it produces a burst of energy. That energy glances off the rocky walls of the magma piping inside the volcano. If one wall is at an angle that faces a seismic station, that station makes a note of where that wall is — a bit like the way a bat bounces sound waves around to figure out where things are, Chaput said. 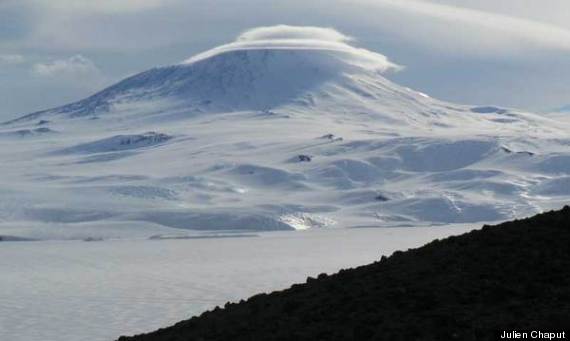 "The nice thing about this is that you can create images like this any time you get seismic activity of any kind — which is all the time, with volcanoes," Chaput said.

The volcano does the work for you. Over time, it gradually adds information to the image, filling in the characteristics of the lava pathways that meander through the mountain.

The method offers a way to passively — and fairly cheaply — learn about how magma and gas move around inside a volcano, which is key to better understanding what particular brand of violence a volcano may unleash, and when.

"Had they taken an image of Mount St. Helens, they probably would have known it would blow up on the side, instead of the top," Chaput said.

"One of the things we need to do if we're going to forecast eruptions is really understand how volcanoes work, and why they erupt the way they do," said Clive Oppenheimer, a volcanologist at England's University of Cambridge, who was not associated with Chaput's research. "That comes down to understanding the plumbing system that brings magma from great depth," Oppenheimer told OurAmazingPlanet.

Both scientists said that, despite its isolation and the sometimes atrocious conditions, Erebus offers the perfect place to figure that out. It stays active — but not too active — allowing scientists to poke and prod a volcano with a beating heart, yet one that is not likely to bite back. [World's Five Most Active Volcanoes]

"The generic understanding we can get from Erebus, and applied to volcanoes worldwide, is very important for identifying why volcanoes erupt the way they do," Oppenheimer said, "and why they can suddenly switch their behavior from peaceful to violent."

The research was funded by the National Science Foundation's Office of Polar Programs. Richard Aster and Philip Kyle, scientists at New Mexico Tech, were integral to its success.