The eruption of Mount St. Helens on May 18, 1980 was colossal. The explosion blew 1,300 feet off the mountain's summit, ejecting more than a cubic mile of material into the surroundings and laying waste to a 230-square-mile area in a matter of seconds. It buried the nearby North Fork Toutle River 600 feet deep and triggered mudslides that reached the Columbia River 50 miles to the southwest. The eruption column blasted ash 80,000 feet into the sky, which later ended up in eleven different states. 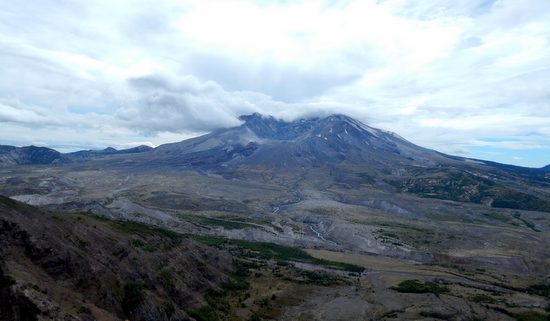 In human terms, it was the most destructive volcanic event in the history of the United States. It killed 57 people and caused more than $1 billion in property damage (about $3 billion in today's dollars). The destruction included 200 houses, 27 bridges, 185 miles of highway and 15 miles of railroad. Then-president Jimmy Carter, after touring the destruction, said "the Moon looks more like a golf course compared to what's up there."

But today, the mountain is an enormous visitation draw and a key anchor of the local economy, an excellent example of how protected lands can redound to the economic benefit of local communities.

President Reagan established the Mount St. Helens National Volcanic Monument on Aug. 27, 1982 to preserve the area for public use and for study. Even 31 years later, there is still a wealth of research to be done -- few other large eruption sites are so recent or so well-documented (not to mention so conveniently located). The most heavily-damaged areas are the most restricted, to study the recovery process, but much of the largely undamaged area south of the mountain, and further north of the blast zone, is open for many types of use - -things like hunting, hiking, biking and horseback riding.

More than 200,000 people visit the monument each year. According to Headwaters Economics, a nonpartisan research institute, the salutary economic effects of this visitation have been considerable. From 1982 to 2008, in the regions bordering Mount St. Helens, population grew by 30 percent, real personal income grew by 62 percent, total jobs grew by 42 percent and real per-capita income grew by 24 percent. This makes some sense -- as the United States has shifted from a manufacturing-based to a service-based economy, it's only natural that service jobs will spring up in communities with high-grade attractions.

While the actual quality of attraction is obviously the most important factor for visitation, the system of U.S. national parks and monuments serves two important secondary functions. First, official designation serves as an important signaling device which brings associations with America's most beautiful landmarks. Second, judicious development of roads, trails, visitors' centers, ranger stations and the like improves visitation by making the attraction more accessible, more understandable, and more easily explored.

These benefits are not lost on the local community, which is heavily service-based. "Business is good," says Dave Sinkler, manager of the enormous Bob's Sporting Goods in nearby Longview. There was a small drop in sales during the recession, he said, but they managed to not lay anyone off. People were still going out, he found, just spending less money in the process. Instead of staying at a hotel, they'd camp, or instead of taking a whole RV, they'd make do with a tent. "People just need peace of mind," he says, and will stretch to get it even if it means a little less comfort.

Mark Plotkin, owner and operator of the bike store Canyonview Cyclery, sees much the same pattern. Though he only started his business a year ago, he says business is good, and largely local. "95 percent of my customers are within 30 miles," he said.

The area's beauty also attracts both new residents and employers. "It's considered a beautiful place to have a business," says Scott Walstra, vice president of the Cowlitz Economic Development Council.

These days, the monument is bustling with visitors, despite the hour-long drive from the interstate to reach the best viewpoints. And it is well worth the trip, just for the view alone. Unlike, say, Mount Pinatubo, whose 10-fold greater explosion created a flat caldera that is hard to grasp from anywhere but the air, Mount St. Helens erupted sideways, creating a amphitheater crater whose size and scale is clear and obvious from the ground. From the Johnston Ridge Observatory (named after a USGS volcanologist killed in the blast), the sheer scale of the eruption is driven home in a way impossible to convey through a simple list of statistics. Statements like "a cubic mile of rock" take on new meaning when that cubic mile is laid out in plain sight, like God attacked the mountain with a cosmic ice cream scoop.