There's a thin line between adventurous and crazy.

Judging by this drone video, that line happens to extend through Sedona, Arizona, where it's manifested as a white stripe of sandstone on the edge of a cliff.

Professional mountain biker Michal Kollbek rode the White Line trail recently and described it to his Instagram followers as "one of the scariest things i have done on a bike."

We believe you, Kollbek. Just watching you ride the trail makes our palms sweat.

In an email to The Huffington Post, Kollbek said he'd known of the trail for several years, but only recently had the chance to ride it when he traveled through Sedona on a trip. After walking the route a couple times, then sleeping on the decision for a couple days, he opted to go through with it.

"Conquering this ride was all mental," he told HuffPost. "I was confident with my skills and knew I could execute it. The key was to block the out the scary thoughts about the potential danger, so I just focused on the trail and not on the terrifying space around me."

Just before the ride, Kollbek adjusted the air pressure in his tires to maximize their grip, stiffened up the bike's suspension, raised his saddle, and walked the route one last time.

"I live for thrills like this, and I would have tackled this line whether it was filmed or not," he added. "The drone was a bonus, and [videographer Marshall Mullen] did a great job capturing the moment. However, it's not for everyone, so I strongly advise inexperienced riders against trying this line."

Just in case the drone footage wasn't enough, here's a different angle of a different crew of people riding the White Line: 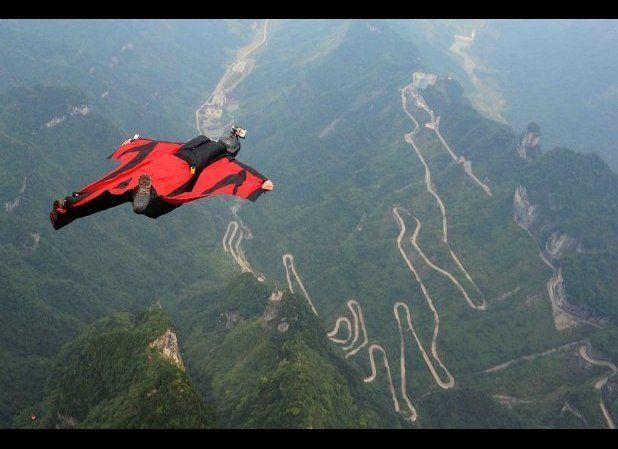 1 / 5
Wingsuit Flying World Championship—Zhangjiajie, China
If you ever watched Rocky the Flying Squirrel take to the air and thought you might want to try that someday, wingsuit flying could be the extreme sport for you. Nicknamed flying squirrel, bat, or birdman suits, wingsuits are specialized jumpsuits with extra fabric in between the arms and legs to allow for increased surface area, added lift, and the ability to glide over great distances. Think of it as horizontal skydiving! The sport is so extreme that only 20 people qualified to compete last October in the inaugural Wingsuit Flying World Championship in Zhangjiajie, China. Flyers jumped from Tianmen Mountain in Hunan Province, descending from a height of almost 5,000 feet, completing a loop, gliding about three-quarters of a mile, and then parachuting down to the finish line. The winner, now a world-record holder, completed the flight in just 23.41 seconds. <br> <em>Photo Credit: Redbull </a></em> <br> <a href=" http://www.theactivetimes.com/worlds-most-extreme-sports-competitions?utm_source=huffington%2Bpost&utm_medium=partner&utm_campaign=extreme" target="_hplink"><strong> Click here to see more of The World’s Most Extreme Sports Competitions</strong></a>