From the first moment the green elixir touched his lips, Chris Whitley knew he was hooked on Mountain Dew. He was an 11-year-old kid on his way back from either BMX or baseball practice (he can't remember which), and his dad bought him a can to try.

“I just liked it from the beginning,” Whitley told The Huffington Post. “I can’t really explain it, it’s just something that’s totally different.”

Whitley, 27, says he now drinks about 40 cans a week. He has several Mountain Dew-themed T-shirts and hats and closely follows Dale Earnhardt Jr., the NASCAR driver and Mountain Dew spokesman. “It’s pretty much a religious obsession for me, I guess,” said Whitley, who lives in Jackson, Mississippi. “I just don’t drink anything else.”

Fans like Whitley keep the sugary, caffeine-heavy soda Mountain Dew popular, even as Americans increasingly yearn for the healthy, natural food that is seemingly its opposite. U.S. soda sales have taken a dive in recent years. Mountain Dew parent company Pepsi and its rival, Coca-Cola, are hawking other products, such as sparkling water, energy drinks and snacks, to try and make up for sinking demand for their flagship sodas.

Mountain Dew, meanwhile, actually captured slightly more of the $125 billion non-alcoholic U.S. beverage market last year, according to Beverage Digest, an industry trade publication. And though Mountain Dew is kind of a niche drink -- about 20 percent of its users are responsible for 70 percent of its volume -- it’s the third most popular "liquid refreshment brand," behind only Coke and Pepsi, Beverage Digest found. 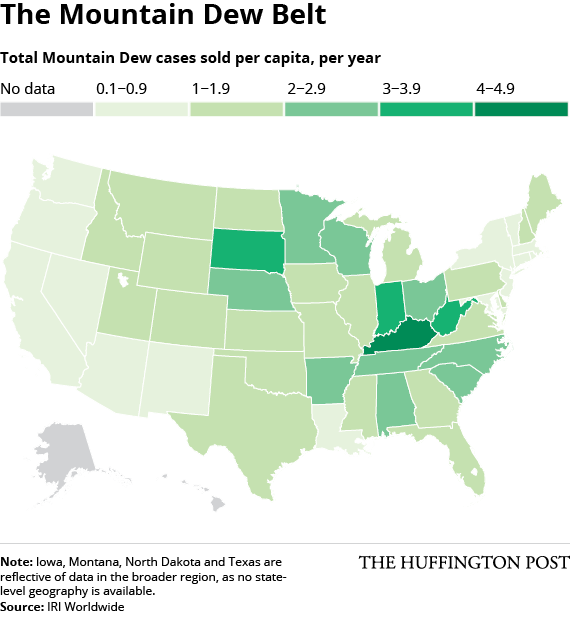 “The thing that really makes it different from a lot of other drinks, certainly from a lot of other carbonated soft drinks, is its incredibly loyal and passionate consumer base,” said Greg Lyons, Mountain Dew’s vice president of marketing. Lyons cited one Mountain Dew fan whose grandmother made him a tuxedo out of cans for his prom and a husband-and-wife pair who have matching Mountain Dew tattoos and a proposal story featuring champagne flutes filled with the green drink.

Like Whitley, these superfans tend to be men in their 20s who live in the South or Midwest. Lyons and his team are working to lure more fans from other areas of the country with different versions of the drink, such as Mountain Dew Kickstart, a beverage the company has marketed as a morning energy drink with real fruit juice. Earlier this month, Pepsi launched two new flavors of Mountain Dew Kickstart: Pineapple Orange Mango and Strawberry Kiwi, both of which feature coconut water, a drink that's spiked in popularity in recent years.

The soda giant is also launching an ad campaign for Kickstart during the Super Bowl on Sunday.

The exact origins of Mountain Dew are the subject of debate, but according to one Mountain Dew historian, Dick Bridgforth, the fizzy drink was born in east Tennessee in the early 20th century and was originally used as a mixer for whiskey.

“They used to serve it in the back rooms, and they would affectionately call it Mountain Dew, which was the east Tennessee name for illegal whiskey,” Bridgforth, who wrote Mountain Dew: The History, told HuffPost. He noted that a lot of the drink's initial marketing had a “hillbilly” theme.

Mountain Dew and other sugary sodas are still so popular in the Appalachian region that dentists and scientists have singled them out as one of the main causes of poor dental health there. They call the condition “Mountain Dew Mouth.”

Priscilla Harris, a professor at the Appalachian School of Law who studies the phenomenon, said it’s not uncommon to see shoppers in the region with entire grocery carts full of Mountain Dew. Coal miners in Appalachia rely on the drink's caffeine to stay alert in a dangerous job. Many locals get water from unreliable wells and figure that, if they’re buying bottled water anyway, then they might as well buy soda.

But probably the biggest draw is the fact that the drink was invented so close to home. “It started out as a local drink. People are used to it here,” Harris said.

Pepsi has used targeted marketing to cultivate a younger generation of Mountain Dew lovers. Tying the drink to NASCAR drivers, indie bands and extreme sports competitions helps brand Mountain Dew as the soda for people who do their own thing and don’t care what others think.

“I’m sure Mountain Dew is alienating to a part of the population of the U.S., and we’re totally fine with that,” said Lyons, Mountain Dew's marketing VP.

By focusing on a “cult, loyal following," Mountain Dew may be better poised than other sodas to survive the health and wellness obsession that has swept the country in recent years, said Denise Lee Yohn, a marketing consultant who has worked with Burger King, Jamba Juice and others. Mountain Dew fans, says Yohn, couldn't care less about all of that.

“Unlike a lot of other carbonated beverages that are targeted toward the mainstream and need to be a lot more cautious about health, Mountain Dew kind of gets a pass,” Yohn told HuffPost.

Just ask Steven Kearney, 20, who has been drinking Mountain Dew since eighth grade and has a can or a bottle every day. Kearney says that one day he may have to consider how his habit is affecting his health. But that doesn’t mean he’ll give it up completely.

Kearney has a collection 80 of cans and bottles. Every time Mountain Dew releases a new flavor, he tries to keep one as a memento. He's a host on the local college radio station in western Michigan and starts every show by cracking open a can. He even has a group of friends he calls “The Mountain Dew buddies."

“I feel like it will definitely be something I’m going to drink for the rest of my life,” he said.