Ever heard of Mothman? Or the Braxton County Monster, Blue Devil, Sheepsquatch, Thunderbirds and Devil Dogs? Not your typical kind-hearted denizens of the forest, these and other mysterious creatures are the targets of a group of hunters known as the Appalachian Investigators of Mysterious Sightings, or A.I.M.S.

The six-man A.I.M.S. crew may look like expert moonshiners, but these guys seriously research and hunt odd creatures on their TV series, "Mountain Monsters," which kicks off its second season tonight on Destination America.

Leading this group is John "Trapper" Tice, who hopes to track and capture some of the most allegedly evasive beasts.

"They're scary sons of bitches," Tice told The Huffington Post. "A lot of them make a bellowing, yelling scream at you. The Wolfman did it to us in Kentucky, and just things you see, you know are way faster than we are. We usually have them beat on intelligence, so we have to use our intelligence with old school tracking and reading signs ability with new technology. And we interview a lot of eyewitnesses. That's how we can get so close to 'em."

Check out some of the creatures being hunted by the 'Mountain Monsters' team.

Native sons of West Virginia who have spent their lives navigating the backcountry make up the A.I.M.S. team. They've investigated monster reports in Pennsylvania, Virginia, West Virginia, North Carolina, Georgia, Kentucky and Ohio, but have captured none.

"Catching one is different [from proving they exist]," said Tice. "In the first place, the guys have jobs, so we usually try to do it in three days, over a weekend and we have limited time. We've been very close, and it's gonna take a bunch of luck, along with a lot of experts to do this. But I think it'll eventually happen."

One of Tice's team members, "Wild Bill" Neff, is a former Marine who looks like he could probably wrestle any number of ferocious creatures to the ground. He doesn't like the attitude of city slickers who want to go to the forests and start killing unknown animals.

"People from the big cities will overrun a place, and the first thing they'll say is that they're gonna kill it," Neff told HuffPost. "We'll, we're not after it to kill it -- we're after it to prove that that animal exists. Anybody who says they wasn't scared is a lyin' S.O.B. I was a Marine and I do not fear. Let me tell you something -- when they say they don't fear, they're lyin' to ya."

When this reporter recently sat down with some of the "Mountain Monsters" team and asked if they've discovered any real evidence of an unknown animal, Tice offered as his Exhibit A a 2-inch-long tooth (pictured below) he found around 2005 on a trail in Pocahontas County, W.Va. He claims it was from a Bigfoot. 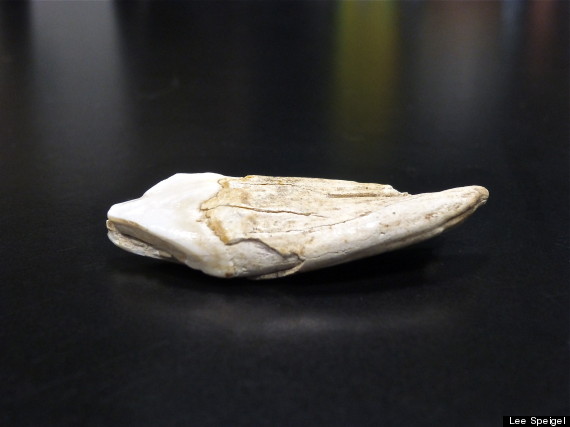 Tice has never felt the need to have the tooth analyzed by any scientific organization. He says he just knows what it is.

"I thought it was a bear tooth and Bill and I had both killed bears and knew it was not a bear tooth. It's not from a domesticated animal -- nothing has a tooth like that. On my mantel, I have a skull collection of every wild species in West Virginia, from a bobcat, coyote, bears, all the way down to a gopher -- I've got 'em all. I was bear hunting at the time, and where his toenails tracked, I seen a little bit of white in the ground and took a knife and dug it out.

"I think it's an incisor [front] tooth from a Bigfoot."