You're probably still reeling over the grisly death from the latest "Game of Thrones" episode.

(Spoiler alert if you haven't seen "Game of Thrones" Season 4, Episode 8 "The Mountain and The Viper.")

The June 1 episode featured Tyrion's second trial by combat, and one of the most horrific endings, with The Mountain gauging Oberyn's eyes out until his head literally exploded into pieces. While this may just seem like highly graphic, sensationalized television, the fight itself alludes to many historical events from the medieval ages.

George R.R. Martin has said before that he takes a lot of inspiration for his "A Song of Ice and Fire" series from history. For one, the Red Wedding came from two events in Scottish history -- the 15th century Black Dinner and the 17th century Glencoe Massacre. However, it appears that the epic battle between The Mountain and The Viper also parallels history. 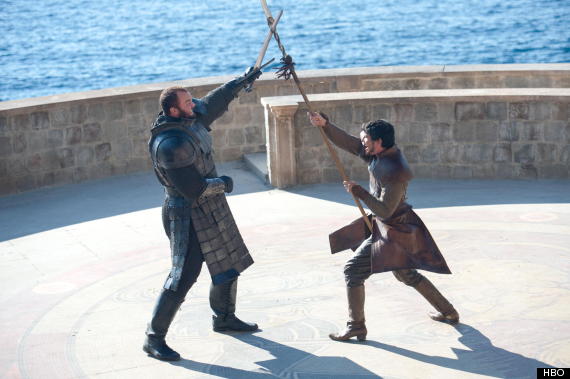 In a recent essay, Dr. Steven Isaac, professor of medieval history at Longwood University, recounted the historical inspirations behind the "Game of Thrones" fight scene. From the 12th century records of a Flemish notary to French epic poems, the battle of The Mountain and The Viper was inspired by an assortment of both history and medieval literature.

Stephen of Massy vs. Monks of Saint-Germain-des-Pres, 1150s

There's no denying that the last minute of Sunday's "Game of Thrones" was the most brutal display of death yet. However, Martin didn't come up with that gory eye-gouging tactic on his own. Dr. Isaac points out one historical judicial battle ordered by King Louis VII of France, which was recounted in medieval documents from the mid-1150s. The duel was ended when an anonymous man, fighting on behalf of the monks, won by "gouging out the eye of his opponent," the champion fighting for Stephen of Massy. That's a pretty terrible way to go, but at least the guy's head didn't explode (we hope).

In Dr. Isaac's essay, he draws parallels between Martin's fight scene and a 12th century trial by combat recorded by Flemish notary, Galbert of Bruges. When Guy of Steenvoorde was accused of murder by Iron Herman, the two duked it out in an exhausting fight. Guy was winning the brawl, just like Oberyn, as he knocked Herman to the ground and was about to deliver the final death blow. However, Isaac explains that, similar to The Mountain, Herman reclaimed victory and "reached up and grabbed Guy’s testicles, and then shoved Guy aside without loosening his grip." Guy then admitted defeat and was thus found guilty and hanged hours later. 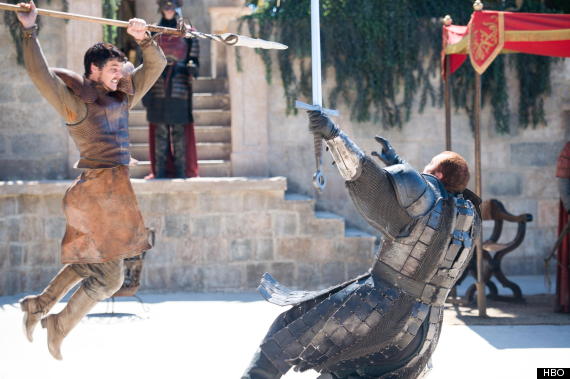 Thierry vs. Pinabel, "The Song of Roland" 12th century poem

The brains-splattered-everywhere part of the "GoT" fight also calls to mind a fictional combat from history. In the 11th-12th century French heroic poem "The Song of Roland," which is loosely based on the 778 Battle of Roncevaux, a trial by combat held after the battle ends as horrifically as a "GoT" episode. In the poem, Thierry is nearly killed by Pinabel, but then strikes his head, breaking his "iron helmet in two and dashing out Pinabel’s brain." Even if Oberyn was wearing a helmet, it clearly wouldn't have helped much.

The essay notes another gruesome fight that may have inspired Martin, a fictional duel from the 12th-13th century French epic poem "Raoul de Cambrai." In it, characters Bernier and Gautier engage in a brutal combat in which Gautier stabs his opponent in the side with a spear yet, like The Mountain, Bernier doesn't give up and continues to fight with the wound. However, the fight ends rather grisly with Gauiter slashing off six inches from the other man's shoulder, including his ear.

CORRECTION: A previous version of this article stated that Stephen of Massy's eye was gouged out in combat. However, it was Stephen of Massy's anonymous champion who was fighting on his behalf. Language has also been added to clarify the sequence of events described in the "Song of Roland."