"Next Steps for the Anti-Mountaintop Removal Movement" is a series of interviews with affected residents and activists in the central Appalachian coalfields region, including West Virginia leader Bo Webb, Kentuckian Teri Blanton, Kathy Selvage in Virginia, Ash-Lee Woodard Henderson in Tennessee, and Appalachian Voices legislative aide JW Randolph in Washington, D.C. While the EPA scrambles to enforce the Clean Water Act and a Republican-controlled Congress attempts to defund strip-mining regulatory measures, and various state agencies continue to be embroiled in Big Coal machinations, millions of pounds of devastating explosives are detonated daily across mountain communities in central Appalachia. As a national movement, what should anti-mountaintop removal activists do next?

There may be no electricity fairy, but the indefatigable campaigner Kathy Selvage has been described as the clean energy angel from Wise County, in southwest Virginia.

A union coal miner's daughter and a long-time grassroots activist in the region, Selvage has lived within a football field of the blast and roar of mountaintop removal strip mining operations. Her native Wise County, in fact, has lost over 25 percent of its land to strip-mining.

Over the past decade, Selvage has been at the forefront of several movements in the central Appalachian coal country to stop reckless mountaintop removal and get the nation at large to understand the true cost of coal -- especially in Virginia: Even with more than 60 mountain ranges and adjacent waterways destroyed by strip-mining, the Virginia state legislature hastily passed a bill in February to strip regulatory controls over proper water monitoring. 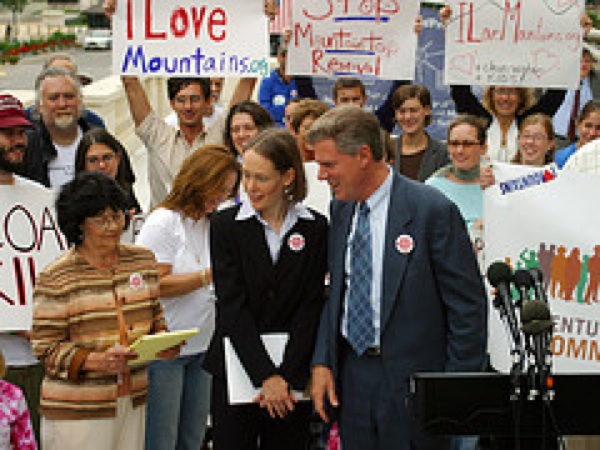 Selvage speaking at rally on left, photo courtesy of I Love Mountains

I caught up with Selvage on her return trip from Washington, D.C., where she had been walking the halls of Congress to support the Clean Water Protection Act.

JB: Thanks for years of advocacy and actions by a growing movement, the EPA issued strict guidance rules on mountaintop removal operations last year, which EPA administrator Lisa Jackson acknowledged would end most valley fill operations. Do you think the EPA has gone as far as it possibly (and politically) can in regulating mountaintop removal or should the EPA still be the focus of lobbying pressure?

KS: I fully appreciate the careful steps the EPA has taken in the last year and I want them to go as far as they can legally and scientifically go. However, understanding that their steps are not permanent and could readily regress in a new administration, we still desperately need to pass the CWPA in the House and the ARA in the Senate to set in stone the protection of our waters from mine waste.

In order to pass the bill, we need courageous leaders in Congress that at least match the courage of Appalachians who vehemently oppose and live with the repercussions of mountaintop removal daily, suffer physically and financially. Burying headwater streams in the region also deprives millions on the east coast of clean drinking water -- it is yet another gift to the nation from Appalachia.

JB: Do you think mountaintop removal mining needs to be framed as only an environmental issue -- and thus, attracting more support from mainstream environmental organizations in DC and beyond -- or as a human rights and health care?

KS: For sure, the Appalachian region and its century -- long complicated and intermingled affair with the mono-economy of coal is not just an environmental issue. Its varied effects on our lives and communities includes environmental issues which mainstream organizations can shine a spotlight on while being careful not to leave people out of the equation or the conversation.

Beyond purely environmental concerns, Appalachians are robbed of future economic development opportunities through the loss of the mountains, their communities magically and tragically disappear, their health is poor and their health care even poorer, and their sense of security and well being is snatched from them as is their "place." 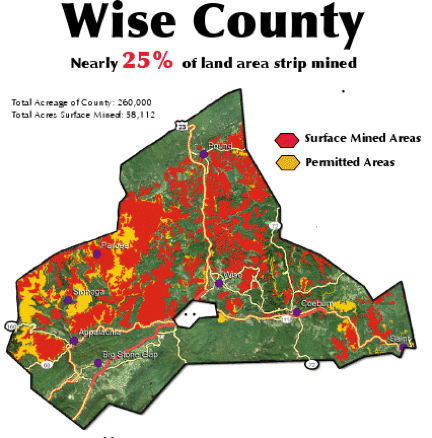 JB: After years of lobbying and leading protests in Virginia and Washington, D.C., where do you think the anti-mountaintop removal movement should focus its funds and energy in the next phase -- and more importantly, where should foundations and major fundraising efforts be dedicated?

KS: The movement would do well to think on a continuum (I believe) rather than imagining our bits of progress as peaks on a chart. I wish for more "thinking out of the box" mode for some creative newness to add vim and a little flair to the movement. It needs a shot in the arm occasionally. For example, let's run an ad about mountaintop removal (maybe an explosion) on an electronic billboard in a district we need the vote in, pair that with a concerted effort for local radio talk show, local newspaper, and local TV to reach others with a personal appeal to contact their representative.

JB: Appalachia Rising -- an alliance of various groups and advocates -- brought 1,000 anti mountaintop removal protesters to march in Washington, DC last summer, where over 100 people were arrested in front of the White House. That was 9 months ago. Should Appalachia Rising just be an annual event to call attention to the mountaintop removal or should it be organizing more sustained and frequent actions?

KS: This is a difficult question to answer, Jeff. One must always think about the resources you have at your disposal, both physically and financially and determine if the action is the best use of your resources. Does it produce results? It seems that 100 arrests in site of the White House would have at least gotten the attention of someone on the presidential staff. For a sustained spotlight on the issue from a jail cell, I believe it would require a sustained stay, one in which you would continue to stay even when your sentence is up -- refuse to leave. A daily visit from a committed reporter would keep the subject alive and before the public. But that would be a tremendous sacrifice from someone and the decision could ONLY be a personal one.

JB: The anti-mountaintop-removal movement has become a national movement, involving mainstream citizens and environmental organizations based in Washington, DC and San Francisco and across Appalachia, direct action groups and affected coalfield residents. A similar national movement to end poverty in Appalachia -- and to end strip mining -- took place in the 1960's, and the question was often asked: Who speaks for Appalachia? What role should affected residents in coal mining communities play in the national anti-MTR movement?

KS: Destruction of 300 million year old mountains and all that flow from them, a national treasure, is a national problem and deserves a national answer -- a good national energy policy that measures up to the task. I know it is difficult but there is no reason not to embrace the challenge. The Appalachian Mountains deserve it, the waters deserve it, and the people deserve it. We must stop assigning stereotypes to Appalachians and instead treat them as the treasures that they are. Don't assume you know them but "get to know them." Exterior organizations can best work on the national energy policy, agency malfeasance, etc. with input from Appalachians and help the Appalachian people polish their skills. It can be a joint effort with separate puzzle parts that fit together perfectly if we are careful to always be considerate of others' feelings and appreciate the unique contributions from each side. We can become one -- two can become one. It is possible.

In addition, we must fully examine the actions of the 1960's. The war on poverty for Appalachia was lost but we must more fully examine why. If we have no understanding of why we did not win that battle, it could easily be lost again. To win the war on poverty in Appalachia, I believe it will first require the formulation of "I have a dream." We must not be shy in our imagination and the setting of goals.

JB: The first bill to end strip mining was introduced in 1940 by Sen. Everett Dirksen -- 70 years ago. U.S. Rep. Ken Kechler, from WV, introduced a bill to abolish strip-mining in 1970, and held the first hearings on mountaintop removal in 1971. Do you think it is important to maintain a citizens lobby force to push Congress, especially this current Republican-held House, to change course and abolish MTR?

KS: Yes, one can grow weary but it is important to stay involved. We must constantly reinvent our own motivators to keep the pressure on Congress. What politicians want, evidently more than all other, is to retain their current positions. We must learn to hold them accountable for their actions if we have not previously and support those who endorse a vision without coal and the burning of fossil fuels somewhere in our future and are actively leading to take steps to achieve that goal. Geology is already dictating the end of coal which is economically feasible to obtain -- we heavily incentivize their work and many of their causal costs are passed on to society at large. Those are not cheap.

JB: Direct action -- nonviolent protests and civil disobedience have been a driving force in the anti-strip mining movement since the 1960's and saw renewed interest from campaigns led by Mountain Justice and Climate Ground Zero in West Virginia in the last few years. What role should direct action -- either periodical actions or a sustained campaign -- play in the future?

KS: Jeff, we must be careful not to alienate anyone in local communities who is a potential ally and should always be taking the temperature of their feelings and follow their lead if working in their communities. For even larger participation in events, I would suggest the lowest common denominator, even if that were only folks singing and storytelling. I imagine the largest outing and then ask Google Earth to turn its microscope on the group. One time, one group, in the figure 1 formation (saying we are one and speak with one voice).

JB: Strip mining takes place in 24 states, including new proposals in the endangered Cook Inlet in Alaska, the Shawnee National Forest in southern Illinois, and wilderness areas near Bryce National Park in Utah. As you know, Sec. of Interior Ken Salazar just green lighted strip-mining operations in Wyoming that will produce 750 million to 2 billion tons of coal -- several times the annual production of all Appalachia. Why should a national anti-mountaintop removal movement only lobby to halt mountaintop removal in 4 central Appalachian states, and not other affected regions?

KS: We shouldn't! When it is wrong for the Appalachians, it is also wrong for Utah, Alaska, Illinois, and Wyoming. From a friend comes these words of advice: "A fair and just energy policy is required to ensure that the costs and the benefits from our nation's natural resources are shared broadly. " We cannot continue to abuse certain parts of our population for the comfort and convenience of others. It simply isn't fair.

We must be taking steps, no giant leaps, toward a goal that is well defined, take great pride in our achievements and never let our eyes drift from the goal. Passage of the Clean Water Protection Act and the Appalachia Restoration Act would be a move in the right direction.