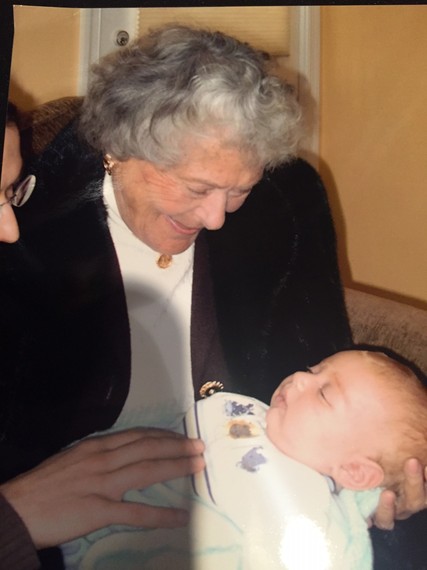 My 96-year-old mother-in-law, my children's "Grandma Dorothy" -- "GG" to her three grandsons, the oldest now 13 pictured above -- died on March 10, abruptly and peacefully. She was spared the indignities and discomfort that so often accompanies dying -- no tubes, no morphine, just a blank gaze, her daughter later told me, perhaps into another universe.

Dotty, we often called her, sometimes lived up to her name. She had an air-headiness about her, in part because she relayed every morsel of conversation with great, dramatic import. Think "breathy."

But she was no air-head. She was strong and smart -- a hip chick. I've often quoted her wisdom about relationships: "The rocks in his head fill the holes in hers." And when she'd see an unlikely couple: "For every pot, there's a lid."

When her son and I divorced, Dotty and I didn't. At one of her big milestone birthdays -- I think, her ninetieth -- she whispered into my ear that I was her "favorite daughter-in-law." I was, after all, the first and the mother of her two grandchildren.

We had some rough spots in the early years, as mothers- and daughters-in-law often do. She openly disapproved of my career choice -- publishing over the classroom. Teaching would have given me a six-hour work day and summers off. I resented that she had the nerve, some fifty years ago, to "call" Thanksgiving as "her" holiday.

My parents didn't care; they'd been living separate lives since the night of my wedding when my father paid the bill and left. For a few years after my own divorce, my ex "had" the kids on Thanksgiving every other year. But somewhere in the nineties, my parents dead and divorce far enough behind us, I was once again at Dotty's holiday table.

Not surprisingly, we had different takes on feminism. I never burned a bra in the seventies, but I had my "clicks," as Ms. magazine dubbed those sudden flashes of insight about male chauvinism. Every so often, they'd build up in my head, and I'd throw down the dishtowel, instituting some new household policy that (I thought) leveled the playing field, as in "from now on, you do the dinner dishes!"

I'd tell these stories to Dotty. She rarely took her son's side. "Oh, he's always been like that," she'd exclaim, almost dismissively. More than once, she referred to him as "the first pancake," adding, "but with kids you can't throw out the first batch."

That said, she marveled that he could change a diaper and sometimes took his children to the park on Saturday. "But that's all he does," I'd complain. "I do everything else."

"That's a lot more than Joe ever did."

Her husband was a workaholic who traveled 340 days a year (or so it felt when I was first getting to know the family). They were married for more than sixty-five years.

Dotty loved to make fun of him. I see her in the kitchen in Scarsdale, acting out the quintessential Joe story. Her back to the sink, she explains: "Joe would be right here, standing next to the cabinet with the drinking classes, and I could be in another part of the house. He'd call out, 'Dotty, can you get me a glass of water?'"

Most of the time, except when it came to her twin sister, Dotty said -- and saw -- what was, not what she wanted it to be. At no time was this more apparent than when she began to attending PFlag meetings and mustered the courage to coax one of her children out of the closet.

Many years later, it was she who made my partner feel most welcome in our big bizarre "family apart." We celebrated milestone events and came together annually at Passover and -- yes -- for Thanksgiving. Dorothy set the tone for the whole family, a matriarchal power that's rare today.

My own mother died when I was 29, she 63. I've outlived her and never got to know her, or to see her choices through more mature eyes. At least, I had that with Dotty. For years, I didn't fully appreciate our relationship, but then I became a grandmother, too. I changed seats at the generational table, allowing my daughter to move into the Mother chair. I joined Dotty's club.

Grandmother and great-grandmother, we recounted each other's visits with "our" three "delicious" boys. We complained -- there was never enough time with them. We qvelled about how beautiful and smart they are, what a "good job" Jen is doing -- and oh, yes, Peter, too. We also worried about how "parenting" had changed.

"In my day, we always carpooled," she offered one day when we were discussing the hours mothers now spend with their children -- far more than either of us ever did. "They don't have a minute to themselves. I'm afraid for them. It can't be good."

I agreed with her that day and on many occasions. I had always loved her candor and respected her open-mindedness, but in the last few years we stood together on common grandma ground, very much in sync about life. I finally understood why she fought for Thanksgiving.

Do you have a question about your family or a relationship? No topics are off limits, and it's all anonymous. Ask via Twitter @MelindaBlau #DearFamilyWhisperer, or click on this link And if you want to learn more about interacting with other significant others -- your extended family -- check out Family Whispering.