Nutella has been on the U.S. market for more than 25 years and throughout that time it has been a widely celebrated Italian import. Recently, however, the classic chocolate and hazelnut spread has experienced a bit of a rebirth with a significant surge in popularity. Type "nutella" into Pinterest and up pops an overwhelming wealth of recipes for cookies, cakes, brownies, cheesecake, truffles, banana bread, smoothies, hot chocolate, doughnuts, and even cocktails and dips, all built around Ferrero's beloved spread.

But Nutella isn't the only chocolate-hazelnut spread in town. We easily found almost half a dozen Nutella alternatives, plus a couple more options that are tweaks on the original concept. Most of these new spreads promise a more natural, less sugar-loaded product; some are even organic, raw, or vegan. Of course, none of those qualities matter much if they can't stand up to the famous original, so obviously a taste test was in order.

Four brands all came within tenths of a point of one another, so there actually wasn't a clear winner. While it might be useful to have a top pick, this really just means you have more awesome options to choose from. Read on for our four favorite Nutella alternatives, plus tasting notes. 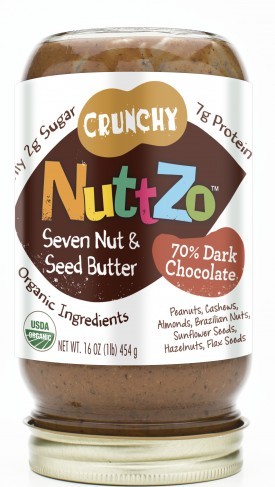 Nocciolata Organic Hazelnut Spread with Cocoa & Milk: Made using the Rigoni family recipe, this spread is certified organic, and made with all natural, raw ingredients. It's also GMO-free and contains no palm oil. Our tasters described Nocciolata as "creamy," "milky," and "incredibly smooth." We also found it had a perfect balance of chocolate to nut. This was one of the sweeter options, and deemed the most similar to Nutella. ($8.25 for one 9.52-ounce jar)

Barefoot & Chocolate Hazelnut Chocolate Spread: Made with Fair Trade and organic cocoa, cane sugar, and vanilla, Barefoot & Chocolate's spread has more than twice the nuts and 20% less sugar than the leading chocolate spread. We found this spread to be rich, creamy, and wonderfully thick, with an almost whipped consistency. It was considered similar to Nutella, and scored points for its strong hazelnut flavor. ($15.98 for two 10-ounce jars) 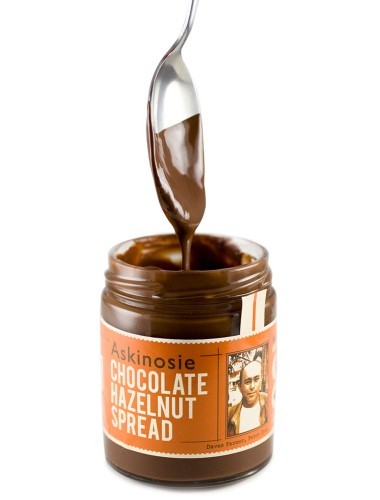 Askinosie Hey, Hey Hazelnut! Chocolate Hazelnut Spread: This 2011 Silver Sofi Winner is made completely from scratch, and contains just four ingredients: hazelnuts (oil and butter), cocoa powder, organic cane sugar, and roasted cocoa nibs. Tasters found Askinosie's spread to be thick and dense, but still easily spreadable. It won raves for its rich, chocolate flavor with slightly bitter notes. "This one was clearly made with high-quality chocolate," noted one editor. Only one con was mentioned: "Could use a bit more hazelnut." ($13 for one 6.5-ounce jar)

Justin's Chocolate Hazelnut Butter: This spread stands apart from the previous three, because it also contains almonds, which do make their presence known, but only subtly. Tasters pointed out that this spread is grainier than the others, but this was not a negative; in fact, many editors liked that about it. We also found it to be slightly less sweet with an earthier flavor than the other spreads. ($9.99 for one 16-ounce jar)

The following Nutella alternatives (listed in no particular order) were not among our top picks, but each one has a number of attractive qualities:

Jem Hazelnut Raw Cacao Butter: Raw, vegan, and certified organic, Jem's take on Nutella is one of the more natural versions we tried. We found it had a nice chocolate-to-hazelnut flavor ratio, but could use a touch of salt to pull everything together. For more on Jem, see Kemp Minifie's earlier review. ($12.99 for one 6-ounce jar)

Rapunzel Choconut Organic Chocolate Hazelnut Butter: This spread has a slightly longer ingredient list than some of the others, but is organic and still far more natural than Nutella. Our tasters enjoyed the smooth and easily spreadable consistency, but found this brand too sweet and also a little fake tasting. ($6.59 for one 8.8-ounce jar)

Nutzo Chocolate Seven Nut & Seed Butter: With an ingredient list that features peanuts, cashews, almonds, flax seeds, Brazil nuts, and sunflower seeds, along with dark chocolate, cane sugar, cocoa butter, and hazelnuts, Nutzo is in a class of its own. It's also 100% organic, packed with protein and Omega-3s, and very low in sugar. We had a little trouble comparing Nutzo to the other chocolate-hazelnut spreads, but on its own, we found it incredibly nutty, rich and thick, and not at all sugar-y. Available in crunchy and smooth. ($12.99 for one 16-ounce jar)

Olivier's & Co. L'Extreme Chocolate Hazelnut Spread: The addition of extra-virgin olive oil sets this spread apart, and also meant that it got mixed reviews. Several tasters loved the oil, but others weren't into it at all. This spread has a beautiful sheen and a looser consistency, both perhaps due to the olive oil. It's not super nutty, but is rich in chocolate flavor. ($20 for one 8.4-ounce jar)

Rawmio Beyond Gourmet Raw Vegan Hazelnut Chocolate Butter: With stone-ground hazelnuts, organic cocoa nibs, and coconut sugar, this spread is definitely for the all-natural crowd. It was called, "very nutty" and "not too sweet" but several tasters pointed to a bitter aftertaste." ($13.95 for one 6-ounce jar)

You can use whichever Nutella alternative you prefer, or the original, of course, to make any of these Nutella recipes.

More from Epicurious:
Know Thy Pits and Sauces: A guide to barbecue, state by state
The 10 Best Tacos in America
Quick And Healthy Back-To-School Breakfasts For Kids
Pizza to Try Before You Die