I never thought I'd write this, but I think we've discovered a new level of stupid below the heretofore impenetrable Sarah Palin floor.

It's not unlike the discovery of a previously unknown species of protohuman deep within a cave somewhere, revealing some new twist in the constantly expanding canon of human evolution. There is, in fact, a Republican of national prominence who makes Sarah Palin seem brighter and less contradictory by comparison. That's not to say Palin has miraculously become smarter or better spoken, it's just that the idiot curve is now redrawn in her favor.

Yes, Governor Haley Barbour of Mississippi is arguably the new king of all Republican stupids. Palin must now relinquish her Twitter feed, her fork cork and her trident. For Haley Barbour has arrived.

What is it about Republican governors? They're either appearing in interviews with a blood-soaked cletus geeking turkeys in the background, or they're lying about hiking the Appalachian Trail, or they're honoring the Confederate States of America while ignoring slavery, or they're entertaining the treasonous option of state secession, or they're bitching about government stimulus money one minute, then posing with giant stimulus checks the next minute. 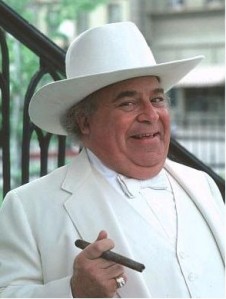 And now there's Haley Barbour, who said this week about the $20 billion escrow fund to compensate victims of the oil spill:

It bothers me to talk about causing an escrow to be made, uh, which will, which makes it less likely that they'll make the income that they need to pay us.

Let's ignore the Palin-ish phrase "causing an escrow fund to be made" and focus on the substance. Paraphrasing Jon Stewart's analysis: Governor Barbour appears to be suggesting here that if BP sets aside $20 billion to be paid to victims of the oil spill, it won't have enough money to... pay out to victims of the oil spill. In other words, Barbour is against compensating victims because he supports compensating victims.

Perhaps next time, Barbour should consult with his smarter sidekicks Roscoe and Enos before speaking about complicated topics like "causing an escrow fund." (Jon Chait gets full credit for the Boss Hogg comparison.)

Of course, this isn't the first and it surely won't be last blast of stupid from Barbour during the ongoing oil spill disaster. He's a study in colloquial southern language and exaggerated accents, a real life character from an unproduced Coen Brothers movie, and it seems that whenever Barbour opens his mouth for something other than pie, stupid things gush out.

For many weeks, Barbour has been downplaying the toxicity and danger of the oil. Back in mid-May, Barbour said the oil spill will have "minimal impact," rivaling Tony Hayward's infamous remarks about how environmental damage will be "very, very modest."

He's also coined some of the finest "the oil is just like delicious food and therefore harmless" metaphors during the whole disaster.

Who can forget the classic description of the oil as "weathered, emulsified, caramel-colored mousse, like the food mousse." Yum. The food mousse. If you're like me, you can't wait to sample some delightful Gulf seafood that's been marinating in the food mousse.

And the good news is, according to Barbour, "Once it gets to this stage, it's not poisonous." Oh boy!

Seriously, if that's the case, I'd like to see Barbour strap on a pair of inflatable arm floaties and dive into a big old slick of the food mousse and flail around in it for a while. See if he can eat his way out. Maybe the Mississippi tourist bureau could videotape it for their next advertising campaign. You know, because the food mousse is both delicious and not poisonous.

Yet, at the same time, Barbour said, "But if a small animal got coated enough with it, it could smother it. But if you got enough toothpaste on you, you couldn't breathe." This made me wonder if Barbour has had one or two mishaps with a gigantic tube of toothpaste. "Dagnabbit! I've accidentally caused toothpaste to be made all over myself again! Can't... breathe! Glug! Glug!" Aides rush into Barbour's bathroom to find the governor coated from head to toe in toothpaste like a real life version of the Shmoo.

But, as with many Republicans carved from the George W. Bush cloth, the doofish behavior tends to overshadow Barbour's more sinister underbelly.

According to Newsweek, Barbour is quite a fan of the Confederacy and all of its trimmins':

The Republican governor of Mississippi keeps a large portrait of the University Greys, the Confederate rifle company that suffered 100 percent casualties at Gettysburg, on a wall not far from a Stars and Bars Confederate flag signed by Jefferson Davis.

When Governor Bob McDonnell of Virginia fumbled his way through "Confederate History Month," Haley Barbour rushed to his defense, declaring that there was no need to mention slavery in the process. Everyone knows about slavery, Barbour reasoned, so why bother to mention it? Barbour, here, played up the debunked Lost Cause mythology -- deemphasizing slavery as a means of ennobling the South's instigation of the Civil War. Barbour said of the slavery controversy in Virginia, "It's trying to make a big deal out of something doesn't amount to diddly."

Barbour was embarrassed by an aide's nasty remarks about "coons" at campaign rallies. But in reprimanding the aide, he only made things worse. As The New York Times recounted it, Barbour warned the aide that if he "persisted in racist remarks, he would be reincarnated as a watermelon and placed at the mercy of blacks."

Right. Everyone knows you don't speak the truth out loud. You keep your racist remarks to yourself. However, Confederate flags signed by Jefferson Davis are fine and dandy. And if you're Haley Barbour, it's also okay to appear at a Blackhawk fundraiser hosted by the Council of Conservative Citizens, a paleoconservative white nationalist organization that, among other things, proudly advances the positions of the old Confederacy.

It gets better. Barbour was also the founder of Barbour Griffith & Rogers, a DC lobbying firm with significant connections to the tobacco industry. When Barbour left the company to help run the George W. Bush campaign in 2000, the firm signed a deal with R.J. Reynolds worth more than $17,000 a month. Nothing like being steeped in lobbying and cancer money on top of everything else.

And Haley Barbour is looking like a frontrunner for the Republican nomination in 2012. I ask you, though: Who better to represent the Republican Party against the first African-American presidential incumbent in the entire history of civilization? Here we have an overweight, southern-fried, tobacco-funded, lobbyist superfan of the Confederacy with a history of racially questionable ideas and connections who can barely string together a comprehensible sentence. What better way to put a face and voice to the increasingly regional, homogenized, sophophobic GOP than to nominate Haley Barbour for president.