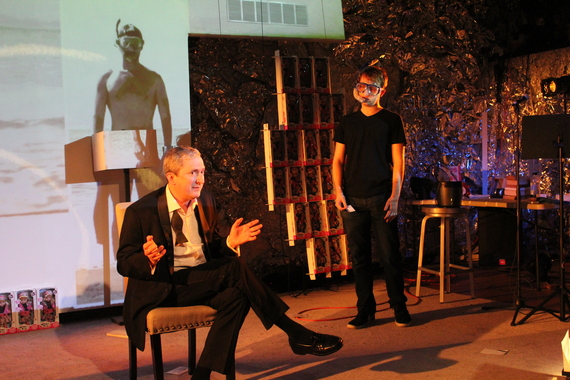 One of my favorite TV shows of all time is the original version of The Twilight Zone. I think it appeals to the amateur detective in me: how many clues will I need to make sense of what the plot is and what the twist will be? It's a rare occasion that I get to experience that same pleasure at the theatre, but that's partially because I don't get to see plays like SPAM very often. Without giving too much away, I would describe SPAM as what the movie Memento might have looked like if directed by Alfred Hitchcock in the digital age. (The spam in the title is to be found in your inbox rather than your grocery store, by the way.)

I first encountered Argentine playwright Rafael Spregelburd through a translation of his play Panic. I immediately wanted to read more by this smart, innovative, and delightfully snarky playwright, whose stage directions are still some of my favorites ever (and I've read a lot of stage directions). The translation of Panic that first led me to Spregelburd was the work of Jean Graham-Jones, a professor of mine at the Graduate Center, and when she informed me that she had translated another one of Spregelburd's plays, I rushed to find out more.

And the more I found out, the more excited I became. SPAM is described as a "modular Sprechoper," which means that it is a spoken opera (Sprechoper) with individual scenes that can be performed in many different orders (modular). In this case, the different scenes each describe one day in a month of the life of an Italian man who has amnesia. Certain scenes are before the actual event that caused his amnesia, and others are after, which leaves the audience to follow the disjointed world as we try to piece the events together along with SPAM's intrepid protagonist, played by Vin Knight. 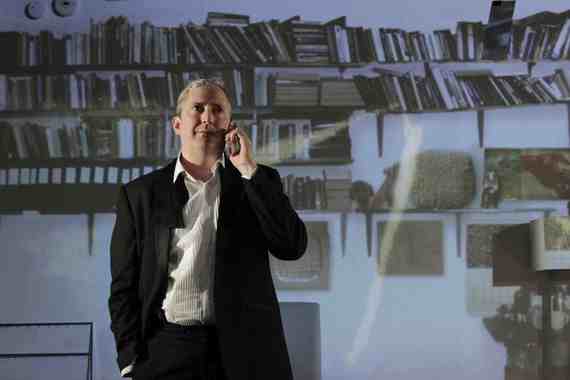 An interesting concept is a great place to start for a play, but it's up to a production to take that play and make it a great theatrical experience. Director Samuel Buggeln, Artistic Director of The Cherry, helms this creative production, which uses a multimedia landscape and two talented actors to create a funny yet poignant look at a microcosm of our digital lives. Designers Jake De Groot (lighting), M.L. Dogg (sound), and Lianne Arnold (video) play are the invisible scenic partners in SPAM. In the visible realm, Knight is joined onstage by Dominic Russo, who acts as Knight's physical and digital scene partner for the entirety of SPAM. Knight is also joined virtually by another talented actor, Zoë Winters, who plays a small, but important part of the narrative.

What I like best about this production is that the tone seems to me to be in keeping with what I first loved about Spregelburd's work: the wit and humor he uses to ask deep questions about contemporary existence. I recognized this aspect of his work in SPAM, which brings us a cursing child's toy and the accidental comedy of "Google Translator" (as it's called in the play) while also asking real questions about what our digital possessions tell us about our identities.

I have thought about SPAM many times since seeing it such a short time ago. It has resonated with me both for its innovative staging and thematic elements, which always tells me that I have seen not just a good play, but a good production. So, move SPAM to your physical and mental inboxes and head over to JACK in Brooklyn to see this production, which plays through the end of April. Get your tickets here.