The seemingly smallest of movie mistakes can sometimes affect a plot in the strangest of ways. Here are nine movies with plots that don’t hold up once you notice one tiny incongruity.

1. An Elvish tattoo brings Middle Earth into the "Pirates of the Caribbean" universe.

Orlando Bloom was one of eight lead actors in "Lord of the Rings" to get a Fellowship tattoo."It says nine, in Elvish, which stands [for the fact that] there were nine in the Fellowship," Bloom told IGN back in 2003. If curious why nine lead actors didn't partake in tattooing themselves in Elvish, this is because John Rhys-Davies -- who played Gimli -- let his stunt double get the tattoo instead.

In any case, this Elvish tattoo ended up appearing in one of Bloom's next roles, as Will Turner in "Pirates of the Caribbean." Although magical elements certainly exist within the "Pirates" universe, the addition of Middle Earth into the plot sinks things faster than that whirlpool in what should have been the third and final movie in the series.

2. The teleporting baby raccoon in "Bambi" could mean the other animals are magical as well.

Apparently this scene has been fixed in DVD versions, but on the VHS and original release, the baby raccoon being licked would just disappear and reappear to the left.

If teleportation exists within the Bambi universe, why did all the deer attempt to run out of that fire instead of beaming themselves away?

3. A human hand guided the raptor to the kitchen in "Jurassic Park." Were secret humans controlling the dinos all along?

As the velociraptor sneaks into the kitchen to find the children, an arm reaches out and pats the tail of the predator. Does this mean that the dinosaurs were actually being guided by other humans at the park? Evil humans that acted in the shadows?

Forget resurrecting dinosaurs -- it's human nature, entrusted with great power, that we have to worry about.

4. The bullet holes are already present in the wall before the shots are fired in "Pulp Fiction," meaning there was no "divine intervention."

Jules says, "We should be fucking dead," and "God came down from Heaven and stopped these motherfucking bullets," while inspecting the bullets' placement in the wall. Too bad the holes were already there. Referring to the picture above of a 1970 Dodge Charger driven by Dominic Toretto in the first movie, an advertisement for "Fast & Furious 6" posed (and answered) the following: "'Fast & Furious' and 'Herbie: Fully Loaded' confirmed to take place in the same universe? We're gonna say yes."

Herbie is an anthropomorphic Volkswagen Beetle that has a mind of its own and is extremely fast. Certainly the ramifications of this sentient car being in the "Fast & Furious" universe are huge.

In "Herbie: Fully Loaded," there is even a street racer scene in which Herbie has LED blue lights and a lowered suspension. For supposedly being some of the best street racers in the world, it's pretty suspicious the "Fast & Furious" crew have somehow never talked about the the "Love Bug." Maybe they all got beat by Herbie once and are too embarrassed to bring that up?

6. There was a gas cylinder on the back of a chariot in "Gladiator."

This happens during a reenactment of the Battle of Carthage in the Colosseum. The dust settles on a fallen chariot and you can see the tank that may have gotten it to flip over.

The Romans may have been technologically advanced, but the movie certainly does not address how they invented elaborate gas cylinders that look strikingly like the ones we have today.

7. Psychic magic existed in "North by Northwest," as evident by the kid who anticipated a gunshot.

That kid visiting Mount Rushmore off to the right, behind the protagonists, seems to predict the future and know a gun is about to go off. Otherwise, why plug his fingers in his ears?

The movie really should have been about this psychic child. The stakes of the plot really sputter out when you know that there is a character with superpowers.

8. The multiple white cars in the background of "Braveheart" would have been useful in battle. This actually seems to happen twice in the classic film. The more noticeable moment occurs during a battle scene (pictured above).

The other time is far less noticeable, but certainly messes with the period illusion. After William Wallace leans in to kiss Murron's body at her funeral, he stands up and a car can be seen driving in the distance, over his shoulder.

Freedom would have been a much more easily achievable goal if Mel Gibson had ran the enemy over in a truck.

9. The shark in "Jaws" wasn't actually scary. Just look at how much fun that one guy is having.

See the smile on that one bucket hat-loving beachgoer? "Jaws" was actually a fun summer romp! 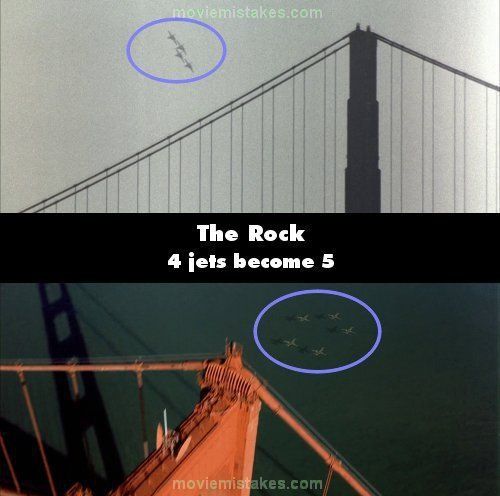