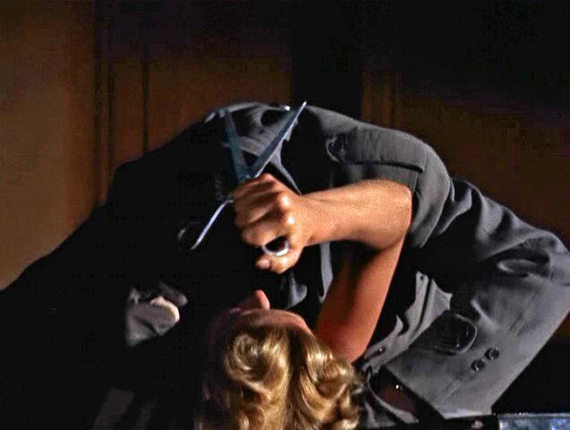 Ah, 3-D! It always seemed more like a gimmick than a true breakthrough in movie making technology. It was first introduced in the 1950s to beat back the threat of television; it was reintroduced in the new millennium to beat back the threat of the Internet. It didn't stop TV, and it won't stop Netflix, but a case can be made that it's more than just a toy.

It Came From Outerspace (1953). Cheesy alien invasion movie, the kind they don't make anymore. From a story by Ray Bradbury. You know you want to see it. Is it a metaphor for the Cold War? You decide. Directed by Jack Arnold.

House of Wax (1953). Vincent Price as the ultimate tortured artist. With a young Charles Bronson in one of his earliest screen roles. Plus the Three Stooges in Spooks (1953).

Inferno (1953). One of the toughest of tough guy movies. Illicit lovers Rhonda Fleming and William Lundigan strand obnoxious husband Robert Ryan in the desert, leaving him for the buzzards, but Ryan is just too ornery to die.

Creature From the Black Lagoon (1954) and Revenge of the Creature (1955). Two creatures for the price of one! Revenge features a young Clint Eastwood in one of his earliest movie roles. Both directed by Jack Arnold again; if any single director can lay claim to being the 1950s 3-D director, it's Arnold.

Flesh For Frankenstein (1973). AKA Andy Warhol's Frankenstein. Rare 1970s 3-D flick. Warhol produced and Paul Morrissey directed this over-the-top take on the manmade monster. Rated X for excessive sex and violence. Followed with a sequel of a sort, Blood For Dracula (1975), AKA Andy Warhol's Dracula.

Pina (2011). 3-D is not just for genre pictures. Wim Wenders brilliantly captures Pina Bauch's groundbreaking choreography in this documentary about the dance pioneer.

Prometheus (2012). Wait, did I say they don't make cheesy sci-fi films anymore? After the embarrassing Alien vs. Predator movies, it seemed like the Alien franchise had no way to go forward. Ridley Scott wisely chose to make this prequel to Alien (1979) instead.

Gravity (2013). Sandra Bullock lost in space. Ms. Bullock resuscitated her sputtering career with her brilliant performance in this mostly solo adventure yarn. An updated version of Marooned (1969). I just wish when she finally landed back on Earth she was greeted by intelligent, talking apes.

Mad Max: Fury Road (2015). When I first heard George Miller was reviving the Mad Max franchise, I admit I was apprehensive. After the disappointment of Mad Max Beyond Thunderdome (1985), I thought it was dead. I am glad to admit I was wrong; Fury Road is not just a brilliant action film, it's a brilliant film, period.