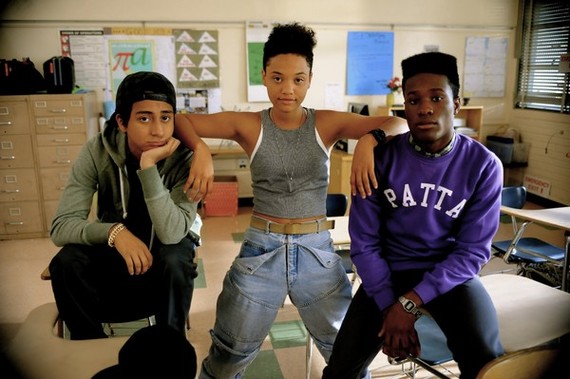 I've heard Rick Famuyiwa's Dope referred to as Nerdz 'N the Hood, which is apt - although a better comparison would be Risky Business.

Set in the Inglewood section of Los Angeles, the film's central character is Malcolm (Shameik Moore), bespectacled and unathletic, a nerd who is both intelligent and smart. He and his friends Jib (Tony Revolori) and Diggy (Kiersey Clemons) read comic books, worship 1990s rap at a granular level and play in their own punk-rock band.

Which means that Malcolm and his friends are targets for their more predatory classmates. Malcolm loses sneakers regularly to his own personal bully and spends his life plotting his route to and from school to avoid accidentally getting shot. He's also drafting the essay he hopes will get him into Harvard, something he has been working toward for much of his life.

Then one day after school, while trying to avoid a bully, he finds himself drafted (does he have a choice?) into the service of a neighborhood drug dealer named Dom (rapper A$AP Rocky). Dom, leaning on his car, asks Malcolm to carry messages to Nakia (Zoe Kravitz), who happens to be studying for her GED on a front porch up the street.

Famuyiwa makes the unlikely progression of events both comic and startling. He moves swiftly from Malcolm's obvious crush on Nakia to his accepting an invitation to Dom's birthday party from Dom himself (in order to see Nakia again), despite the fact that, as his friends point out, "this is a birthday party ... for drug dealers."