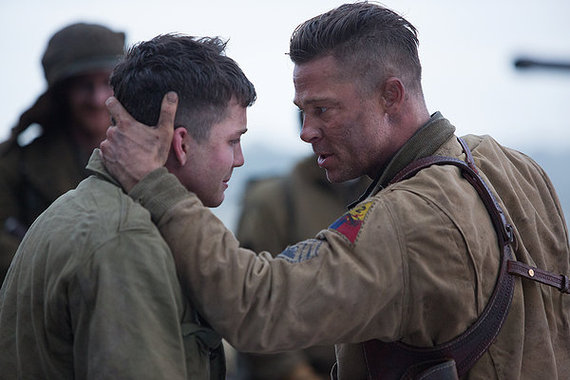 This seems to be the season for movies in the 140-150 minute range, length apparently meant to convey importance.

David Ayer's Fury is one of the few that warrants its length (or most of it). Brutal, punishing and exciting -- in that order -- Fury gives you an approximation of what it would be like to spend a few action-packed days trapped inside an under-equipped American tank toward the end of WWII. You get everything but the smell. And you can imagine that.

While there's not a lot of plot, there is a big story at work in Ayer's script. The plot focuses on the events of a few days with a tank crew, as they head toward a showdown with the Nazis. But the story examines the effects of war on the human soul, in this microcosm of the population.

The tank features a crude redneck (Jon Bernthal) and a devout one (Shia LeBeouf). There's a Mexican-American (Michael Pena) and a raw recruit (Logan Lerman), plucked out of basic training and put on the front line a month before Hitler calls it quits.

Their leader is a steely pragmatist played by Brad Pitt. He's promised his crew he would get them through the war alive. And he's kept his word for three years, until just now.

But as the movie starts, he's lost a man -- and his replacement is a green assistant driver with no combat experience.