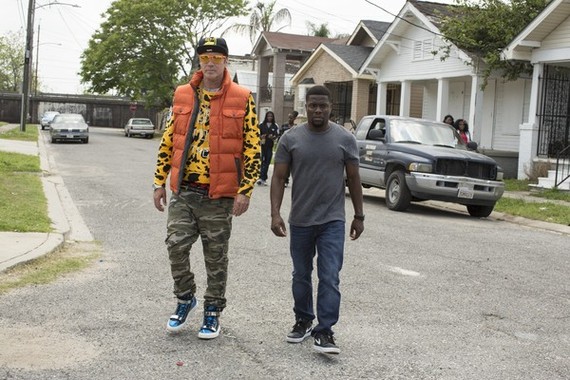 Will Ferrell and Kevin Hart seem like a match made in the acquisitions or marketing department, aiming for the merger of two different comedians' respective audiences, which don't necessarily overlap.

But in fact, I chuckled and even laughed out loud more often than I expected in Etan Cohen's Get Hard, opening Friday, which teams two comedians both desperately in need of someone to edit their endless comic impulses.

Is Cohen that man? Surprisingly often, he is. Unlike, say, Ferrell's long-time collaborator, Adam McKay, Cohen apparently isn't as charmed by Ferrell's endless riffing - and also knows when to keep Hart from blowing his stack ad infinitum.

While the script by Cohen, Jay Martel and Ian Roberts is inconsistent, it also shows a restraint that works best when it bumps up against the film's comic hyperbole. There's almost a Simpsons-like casualness about the violence, which is both comically gruesome and quickly shrugged off.