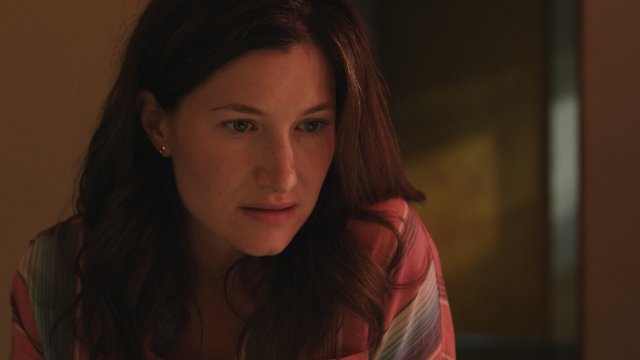 I'll admit it. I have a critic's crush on Kathryn Hahn. Jill Soloway's witty, surprising Afternoon Delight only confirms it.

I've been a Hahn fan for a number of years; I celebrated when she landed the lead (opposite Hank Azaria) of a sit-com called Free Agents (and mourned when this smart, funny show was quickly canceled). I thought she stole every scene she was in of My Idiot Brother and this summer's We're the Millers.

Indeed, I saw Hahn in a line at Sundance in January where Afternoon Delight premiered - one of those Disneyland-like snakes of people where, when you start moving, you keep passing the same people as you wend your way back and forth. So I took the opportunity to say, "Hey - Kathryn Hahn! Big fan!" Yes, I know how pathetic that sounds. She certainly looked surprised - I couldn't tell whether it was about being accosted or at being recognized.

Anyway, I watched Afternoon Delight and was convinced all over again that, given the right opportunity, Hahn could give Melissa McCarthy and Kristen Wiig a run for their money as the funniest woman working in movies. Afternoon Delight isn't perfect, but it is a showcase for Hahn's range as an actress, comic and otherwise.

With her wide, elastic mouth and that Bob Hope profile, Hahn commands a wide range of facial expressions and, at various times, deploys many of them in this unexpected tale of a bored L.A. housewife. (Indeed, given its subject matter, the film would make an interesting bookend-pairing with the upcoming Concussion.)

She plays Rachel, married to Jeff (Josh Radnor), who develops apps for cell phones and whose business has recently exploded - so much so that he spends his time with his face buried in his own phone (when he's not talking on it). She has one small son and spends a lot of time either doing volunteer work at the Jewish Community Center where her son attends preschool - or trying to avoid the clutches of her bossy friend, Jennie (the wonderful Michaela Watkins).

But she's got a problem, which she discusses with her therapist Lenore (a delightfully crisp and self-involved Jane Lynch): Rachel and her husband seldom have sex.