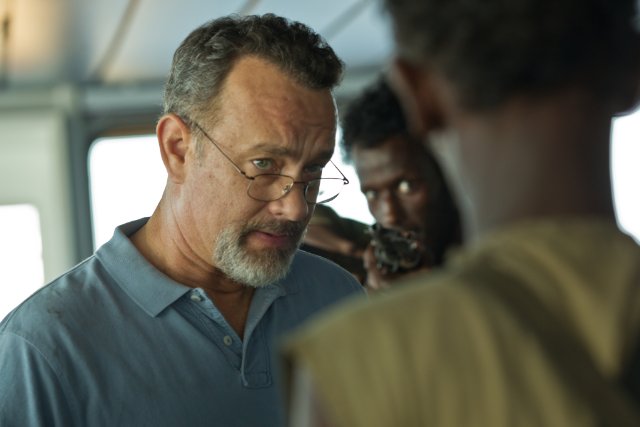 Apparently we're going to have a bumper crop of outstanding thrillers this season -- Gravity, the upcoming All Is Lost (well, not technically a thriller but still intense) -- and now Captain Phillips.

Where the first two are fiction, Paul Greengrass' latest film finds him returning to a story ripped from the headlines (as he did in Bloody Sunday and Flight 93). Based on the title character's book recalling the 2009 incident -- in which an American cargo vessel in the Indian Ocean was captured by four Somali pirates -- Captain Phillips puts you right in the middle of the action and never lets you go.

There's not a lot of preamble. We see Phillips, played by Tom Hanks, saying goodbye to his wife in Vermont, then showing up to board the Maersk Alabama in Oman, ready to take the ship's 17,000 tons of cargo to Kenya. We also see Muse (Barkhad Abdi), a young Somali man apparently part of a group in the thrall of a warlord, being upbraided for not bringing in any money that week. He and his cohort are roused to hit the ocean and find a boat to capture and ransom.

On the Alabama, Phillips reads his email, which includes a warning about pirate activity in their area. So he orders a security drill -- just as he spots a pair of fast-moving skiffs bearing down on them from behind. He and his crew are able to bluff and outmaneuver them until one skiff turns back and the other suffers an engine problem.

But the next day the boat that didn't turn around gets its engine working and overtakes the Alabama. Despite Phillips' best efforts, the four pirates board and take the bridge crew captive.