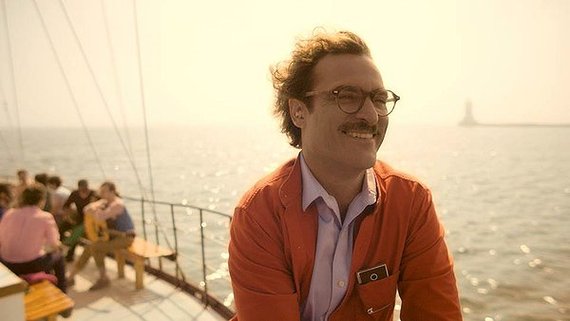 Spike Jonze's Her is the year's most audacious trick: a film whose best (and longest) moments are simply dialogue between two lovers, figuring out their feelings about themselves and each other.

If that sounds like Before Midnight or either of the other Richard Linklater talking-lovers movies, well, okay -- except that, in Her, we only see one of those people: Theodore Twombly, played with an open-faced neediness by Joaquin Phoenix. We experience the entire relationship through his face -- and her voice.

It helps that her voice -- and her name is Samantha, by the way -- is provided by Scarlett Johansson. An increasingly fearless young actress, she is the voice of the next step in operating systems, or OS's. She's not just Siri -- she's Siri with a growing IQ, access to all the information in the world and the ability to assimilate it and synthesize it. And then, eventually, to have feelings about it.

Theodore, an obviously well-paid scribe at a company called BeautifulHandwrittenLetters.com, has no luck with the ladies -- even when they're practically drawing him illustrations of the human reproductive act. He's bereft after a break-up, convinced he's doomed to a life of solitude.

Then he installs Samantha and she not only organizes his life -- she gets him, in a way that no one ever has gotten him. And she needs him as well, to have an existence that somehow transcends the physical boundary separating them.

That, indeed, is the whole story of this film: A man falls in love with an OS, who could potentially be the perfect girlfriend (except for that one small drawback).