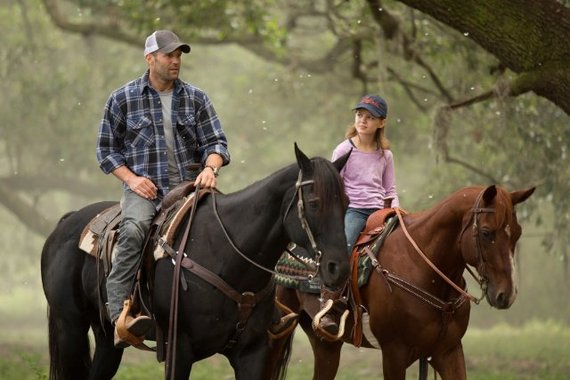 I'd always imagined him as the new Steve McQueen. But Stallone took this script down off the shelf, taking credits as writer and producer on Homefront for his Expendables costar.

It's not hard to imagine it with Stallone playing the central character, Phil Broker. And it would not have been nearly as interesting a movie. Stallone is Stallone; you get what you get, which is always more or less the same thing - the sad-eyed sneer, the self-deprecating, Jersey-accented one-liners, the beefy (now aging) physique. He's less an actor than an archetype.

Statham, however, is like McQueen: an action star who's also an actor. He brings more than personality to his roles and is always interesting, even at rest. Plus he's believable in the kind of everyman roles he often takes on.

Even working in Stallone's minimalist action-centric script, with workmanlike direction by Gary Felder, Statham is a treat. Here he plays a DEA agent who, having lived undercover to bust a biker ring of meth cookers and distribution, Broker has quit law enforcement and moved his pre-teen daughter (Isabela Vidovic) from New Orleans to a tiny Louisiana backwater.

(At some later date, let's have a discussion about how tax-credit incentives have made Louisiana everybody's favorite backlot.)