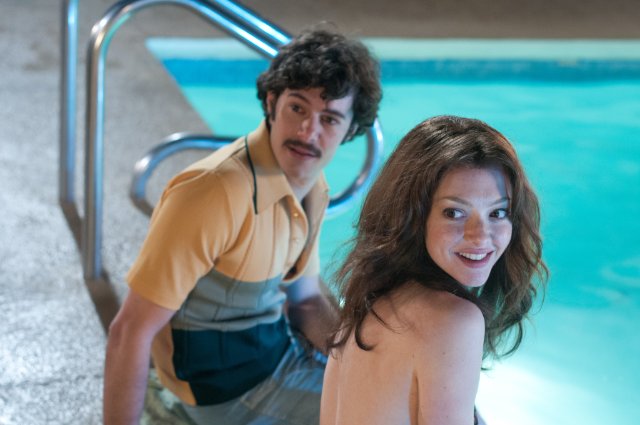 A dramatic look at the life of Linda Lovelace, whose oral-sex skills added a phrase to the common lexicon, Lovelace is a hard film to enjoy, but not to stick with. It looks at a moment in American pop culture when the lid came off and many of the old taboos seemed to be on the chopping block.

This only happened a little over 40 years ago. Still, it's hard to imagine now how shocking it was for a hardcore film to crossover to the mainstream -- or far enough into the mainstream that it was being reviewed in the New York Times, discussed on talk shows and joked about by comedians on TV. For a sense of just how repressive the culture was (various jurisdictions prosecuted the Deep Throat folks for obscenity), check out the 2005 documentary, Inside Deep Throat.

With Lovelace, directors Rob Epstein and Jeffrey Friedman give a dramatic sense of how one young woman can let her life spin out of control. Ultimately, Lovelace let herself be put at the center of the furor that was Deep Throat without having any sense of the impact it would have on her own life and the lives of the people she cared about.

In Andy Bellin's sometimes harsh script, young Linda Boreman (Amanda Seyfried) is a parent-dominated teen, practically under house arrest with her strict, domineering mother (an unrecognizable but very good Sharon Stone) and retired-cop father. It's the early 1970s and they've moved to Florida, where Linda's mother hopes she can escape the shame of Linda having an out-of-wedlock baby.

So Linda is swept away when the charming (or, at least, smarmy) Chuck Traynor (Peter Sarsgaard) wanders into her life. A hustler with the smooth patter of a pimp, he marries Linda before turning her into a money-maker.