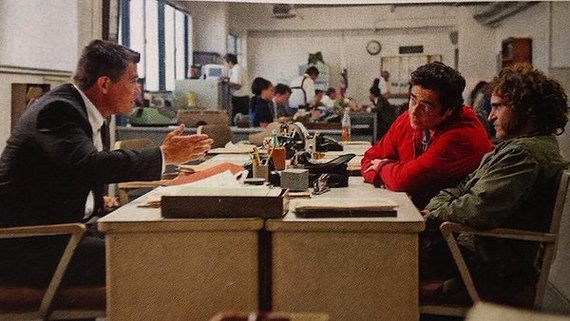 I was engaged for the first hour of Paul Thomas Anderson's Inherent Vice -- and frustrated into raging impatience by the final 90 minutes.

Or, in this case, it's a detective story that ultimately decides there is no mystery to be solved. Or else that it's simply going to skip that and move on to the next mystery -- and not solve that one either.

If you've already spent money on a ticket to this perplexing exercise in obfuscation, based on the largely positive reviews, you have my sympathy. If you're considering buying a ticket to see it based on those same reviews, try a little experiment:

Did you see and like The Master? If the answer is yes, then, by all means, go see Inherent Vice.

But if you didn't like Anderson's last film, you probably won't like this one. And if you did a little research, I would wager you'd discover that a high percentage of the critics who are praising Inherent Vice were also boosters of Anderson's opaque 2012 attempt at very serious cinema.

That's much more of a connection than anything in Thomas Pynchon's gloss on the hard-boiled genre, which was published in 2009. Pynchon sets it up like a classic detective story, then spends his pages chasing dead-end storylines that never seem to find their way back to some point of relevance.

So it is with Anderson's film, which starts promisingly.