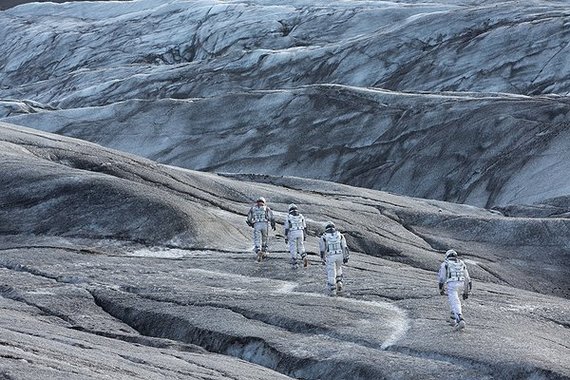 Christopher Nolan's philosophy of filmmaking apparently is this: Why make one movie when you can make three?

Interstellar works much more often than it doesn't. While the script by Nolan and his brother Jonathan wants to traffic in ideals and ideas about gravity, time and relativity, it gets bogged down when it actually tries to be human. Because the Nolans' ultimate message? Love conquers all.

In this film as in the best of his past work, Nolan's strength lies in putting his characters in life-or-death situations -- such as trying to escape a tsunami seemingly a mile high. Exploring new worlds is never an easy job.

If Nolan's real message -- about connections between people and how they give us the strength and courage to go on -- seems simplistic, well, it should also be noted that the heart is the territory where this film finds its greatest strength. Nolan deals in emotions that hit you like a wave -- indeed, like that massive tidal wave that threatens the characters in this film at one point.

Though set in an unspecified future a generation or so hence, this is a film about our current time: with a distrust of science and self-centered gaze, at a time when all wheat has succumbed to a blight and the planet is beset by dust storms. Cooper (Matthew McConaughey) is a corn farmer, a widower with two teen-age kids who was supposed to be an astronaut.

That, however, was before the Earth's ecosystem turned on its human caretakers, with crop failure and perpetual dust storms. We have ruined the planet, and we have no solution other than trying to eke out a living for those of us who are left. (You can practically feel Fox News painting a target on this film, even as it unspools on the screen.)