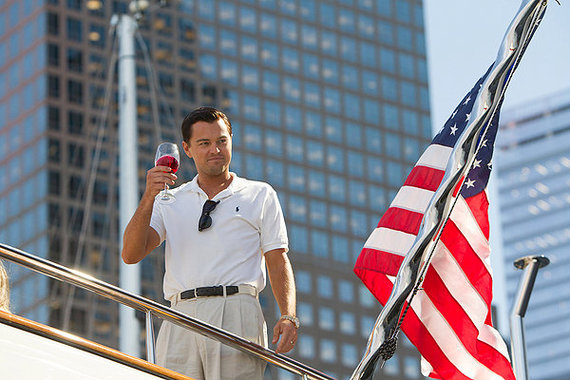 He's not really a wolf -- he's more like a hyena, a scavenger, a bottom-feeder. Why would you want to know his story?

That's my takeaway from Martin Scorsese's The Wolf of Wall Street.

His name is Jordan Belfort and, as played by Leonardo DiCaprio, he's a fun-loving, money-churning, drug-snorting, hooker-banging playa. He is a real person; he did do these things, then wrote about them in a memoir upon which this film is based.

The big question about this film is: Why?

Why would Martin Scorsese and Leonardo DiCaprio lend their considerable talents to a project so devoid of anything resembling humanity, except in its most base and venal form? Why would anyone want to watch this movie -- and what would they come away with?

Never mind protestations that this is a cautionary tale, a moral fable, blah blah blah. The average 18-to-24-year-old, lured into this film by the ads that make it look like a companion piece to Spring Breakers, will mainly come away thinking: Whoa, how do I get a life like that? The money, the sex, the drugs -- I want it all, even if it means screwing unsuspecting investors to get it.