The visual minimalism of Manakamana, a new documentary by Stephanie Spray and Pacho Velez, creates a vivid portrait of a Himalayan temple that is never shown. The inventive and calculated film profiles visitors to the popular hilltop Manakamana temple in Nepal, accessible by a shaky ten-minute cable car ride. Manakamana is composed of several static shots spanning the length of a 400-foot magazine of 16mm film, which is incidentally about the length of the trip to the temple.

Produced in conjunction with Harvard University's Sensory Ethnography Lab, the laboratory behind documentaries Sweetgrass (2009) and Leviathan (2012), Manakamana is equally indebted to cinéma vérité, ethnographic film and experimental art film. It is ultimately a collection of incomplete vignettes, each one lacking a beginning and an end. Together these stories indirectly create a narrative about the unseen temple. Some passengers discuss the temple and its history, while the silent actions of others suggest rituals or customs associated with the temple. 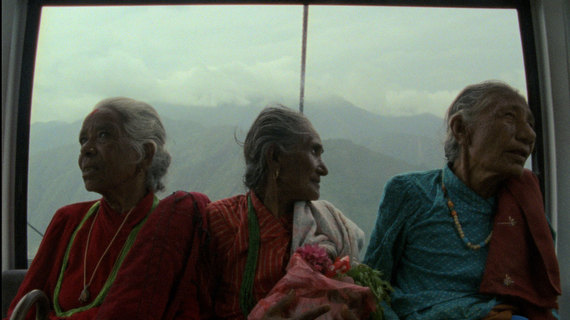 Early in the film, three older women, two who are co-wives, share a cramped seat in a cable car. They speak with familiarity and ease, refraining from self-conscious behavior seen by many of the film's other subjects. The women talk of the "old days" and how difficult their lives once were. They recall visiting the temple when they were younger, before the cable cars were erected, and how much the area has changed. Halfway through the ride, one of the women tells the others a Hindu tale of a girl who ran away from the man she was destined to marry and took refuge in a temple like Manakamana. As if timed intentionally, her story concludes just as the car arrives at the temple and the women disembark.

This ode to tradition and reflection on the past is contrasted by the brazenly youthful and modern scene that follows. As the next car departs the dark, enclosed platform and is exposed by sunlight, three young metalheads are pictured, dressed in all black and preening their long flowing hair. The young men are among the liveliest of of passengers in Manakamana and they appear more as tourists than pilgrims. At one moment all three pull out their digital cameras and begin snapping shots of the lush hillside below. A squealing noise is revealed to be a tiny kitten, who crawls into the frame and prompts an argument about whether kittens or bunnies are preferable -- the cat's owner insists bunnies are for girls. And one of the passengers complains that the cable cars should have air conditioning and that he doesn't like playing in bars, where his band has a show that night. 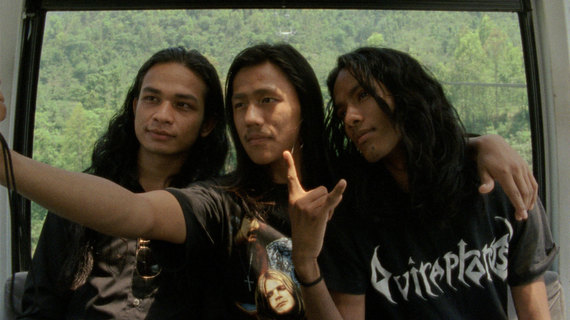 This conversation -- and the selfies taken mid-air -- render the journey as something less austere than the somber, silent, and serious subjects shown thus far have intimated. Because the temple is never seen, viewers must construct an image of it based on its visitors. The complexity and variety of the subjects obstructs easy classification of the temple. Manakamana is ostensibly a place where people sacrifice chickens, worship the temple's goddess, buy popsicles, and take photos with their kittens. In this way, Manakamana is a site not unlike sacred places around the world that serve both those clutching religious books and travel guides. It seems both foreign and familiar.

The repetition in Manakamana is meditative and induces reflection, yet the film is highly entertaining and even comedic at times. Conclusions drawn from the neutral yet invasive vantage point of the camera are often insufficient and unexpected turns occur in most scenes. These fragmentary vignettes are nonetheless telling and personal, developing a rhythm and intimacy as the trip is repeated. Even though viewers are denied any depiction of the temple, they are not left wanting, and by the credits it feels as if one has just concluded a visit to Manakamana.

Manakamana is currently playing in theaters and at film festivals across the U.S.