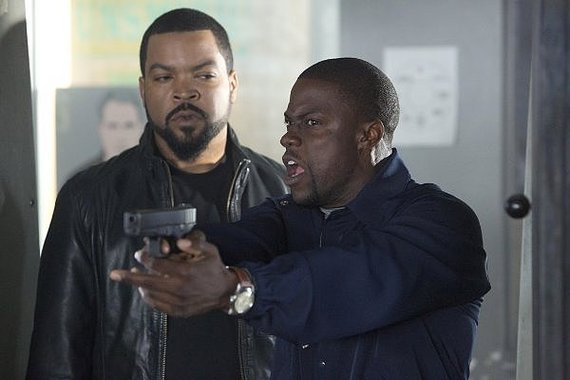 It's easy to understand what they're going for in the odd-couple action-comedy Ride Along. It's the classic comedy-team set-up of the tough, cynical straight man and the big-hearted stooge.

Whether it was Laurel & Hardy, Abbott & Costello, Hope & Crosby, Martin & Lewis -- or such modern attempts as Eddie Murphy and Nick Nolte, or Chris Tucker and Jackie Chan -- the dynamic never varies between the cool guy and the eager wannabe who never will, but who'll win our hearts with his misguided, comically unsuccessful efforts.

One other thing separates the aforementioned comedy teamings with that of Ice Cube and comedian Kevin Hart in the tepid Ride Along: Those earlier performers knew how to be funny. Even when the material wasn't strong, the team itself had comic resources to draw on.

But Tim Story's Ride Along, written by a committee (that includes the writers responsible for, among other things RIPD and Employee of the Month), suffers from comedy malnutrition. There is a lot of effort expended but even the cheap laughs cost a lot here -- and they're just never that funny.