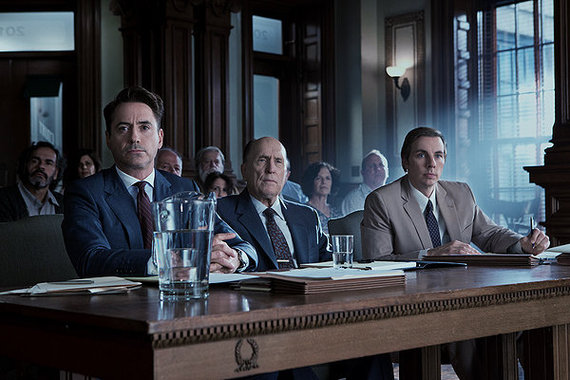 The Judge is, in its way, the kind of old-fashioned potboiler -- a courtroom drama -- that the studios made regularly when the studios actually thought there was an audience for films about adult concerns.

It's directed by David Dobkin, heretofore a director primarily of comedy (Wedding Crashers, Fred Claus). That comic impulse is less a problem (though it is s problem) than Dobkin's inability to focus his material, which leads to an unworkable running time of 140 minutes.

Fortunately, Dobkin has the big Bobs at his disposal: Downey and Duvall. They play a father and son who barely speak, as evidenced by Duvall's chilly handshake when Downey shows up at his mother's funeral after an absence of almost a decade.

Duvall is Joseph Palmer, a longtime judge, sitting on the bench in a small town in Indiana, a stickler for the law of wide repute. Downey is his son Hank, a hotshot defense attorney who seemingly will go to any length to get a client off. Dad disapproves of his son's methods, which is, of course, the linchpin of the plot.

Because, of course, the old man gets in a jam -- accused of hit-and-run on a guy he once sent away -- and needs a lawyer. He rejects Hank at first, before recognizing that the case against him is too strong for an inexperienced local lawyer to handle.

The case itself -- and the personal dynamics between father and son -- would be plenty for most movies but writer Nick Schenk has more novelistic ambitions, which finally undo him.