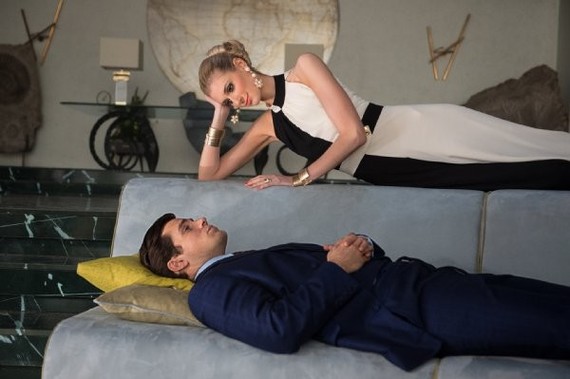 Guy Ritchie's The Man from U.N.C.L.E. is a day late and a dollar short -- actually, make that several seasons late, for anyone who watches the outrageously funny animated series, Archer.

Watching Henry Cavill deadpan his way through this film as CIA agent Napoleon Solo (the name says it all, doesn't it?), I kept waiting for him to drop one of those random one-liners that punctuate the Archer episodes like bubbles of laughing gas. Cavill looks the part and could easily play the human version of this cartoon character.

Unfortunately, Ritchie and his cowriter Lionel Wigram didn't have a roomful of comedy writers to punch up their soft script. The result is a heavy-footed film that barely gets by on one actor's charm, animated by some patently bogus-looking special effects.

For those of us ancient enough to have been impressionable TV viewers when The Man from U.N.C.L.E. aired on NBC beginning in 1964, the memories hold not the slightest whiff of a spoof. The show was TV's answer to the growing popularity of the James Bond films and the belief that the audience was intrigued with intrigue and spies (indeed, Bond creator Ian Fleming was one of the show's originators).

While there was humor in the give-and-take between Solo (Robert Vaughn), colleague Illya Kuryakin (David McCallum) and boss Alexander Waverly (Leo G. Carroll), this show was meant to be semi-serious and exciting, along the lines of the original Mission: Impossible (which went on air two years later). If you wanted parody, you tuned in to Get Smart (which debuted the season after The Man from U.N.C.L.E.).

Now all three of these series have graduated to the big screen -- and you can tell from the final scenes of U.N.C.L.E. that it's meant to be a tentpole franchise. It worked for Mission: Impossible," though that series is showing its age 20 years and five films into the process.

Ritchie is a pioneering cinematic stylist whose early films broke ground by infusing the most eye-catching visual effects from TV commercials into the British gangster film. Unfortunately, he has never been particularly strong on story. Nor is he a comedy writer: He's a director with a kinetic and playful visual style, who seems to completely lose the thread when he takes the reins of a big-budget studio franchise (i.e., the cynically cash-grabbing Sherlock Holmes films with Robert Downey Jr.).

So it is with The Man from U.N.C.L.E., which has a repetitive plot and tropes.