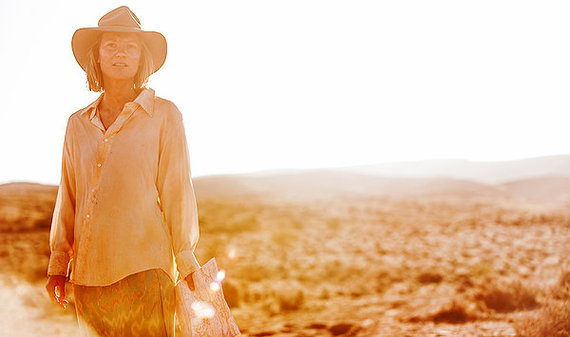 There is a growing canon of films built around a man/woman-alone against the elements. Two of last year's most gripping films -- Gravity and All Is Lost -- and two to come shortly focus on the tininess of man in nature and the lengths and limits of his strength and resolve.

In all of the much-deserved shouting already out there about Reese Witherspoon in Wild (to be released later this year), a little film like Tracks could easily get lost. It's a less audience-friendly film because while the two physical journeys are similar, the psychological journeys are much different.

In Tracks, the ubiquitous Mia Wasikowska plays Robyn Davidson, a young woman who decides to do what no woman has done before her: She will walk halfway across Australia, beginning in desolate Alice Springs and traversing 1,700 miles of desert and wasteland, walking to the ocean on the island continent's west coast.

Directed by John Curran, Tracks is based on a true story, written by the real Davidson, who convinced National Geographic to sponsor her trip in 1977, in exchange for exclusive first rights -- and the right to parachute in a chatty photographer (Adam Driver) from time to time to document her progress and bring her supplies.

As portrayed by the expressively still Wasikowska, Davidson learns to train camels before she embarks, then works as a camel trainer in exchange for camels of her own. She uses the camels to make her trek, a journey measured in months. What compels her to embark on a long and potentially hazardous trip?

Mostly the urge to find true quiet, as it turns out. She simply wants out of the noise and distraction of the city -- and civilization, in general.