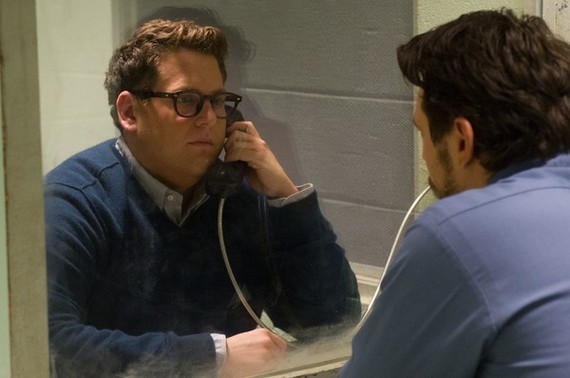 True Story is not a bad movie; indeed, it's a creepy little tale that has moments that will unnerve you. But the limitations of its script and of Jonah Hill's performance in the central role keep it from transcending its shortcomings.

Based on actual events, True Story feels like a reporter's tale, but it wants to be something more. Hill plays real-life reporter Michael Finkel, a hot-shot New York Times magazine writer whose cover stories uncovered injustice and atrocity in war zones and elsewhere around the globe.

Back from assignment for a story that's made waves, he's called in to meet with editors, because of complaints about what are being called mistakes in the story. Eventually, Finkel admits that he consolidated characters and their recollections, to create the most impact. It all happened to someone, he rationalizes, even if not to the people whose pictures accompany the story. He also admits to actually fabricating some of the material. The game is up and he's out.

Though his sympathetic wife (Felicity Jones -- really?) welcomes him home from a life of travel, Mike is restless, angry, humiliated -- made more so when his pitches to editors at other publications seeking freelance assignments come up empty.

Then he gets a call from a reporter in Oregon: Apparently, a local man named Christian Longo (James Franco) murdered his wife and three small children, then fled to Mexico where he lived as a fugitive under the name "Michael Finkel," even identifying himself as a New York Times reporter. He's been captured and is now in jail, awaiting trial.

So Finkel writes to Longo in prison, then travels to meet him to find out why he would use his name as an alias.