It's unimaginable that Jimmy Stewart, Kirk Douglas or John Wayne would have endorsed a perfume at the height of their careers.

But it's a new era where movie stars routinely are pitchmen/women for wrist watches (Leonardo DiCaprio for the Tag Heuer brand), cars (Laurence Fishburne for Kia) and fashion (Nicole Kidman for designer Jimmy Choo). And don't forget the stinky water! In 2012, A-lister Brad Pitt appeared in ads for the Chanel No. 5 fragrance. 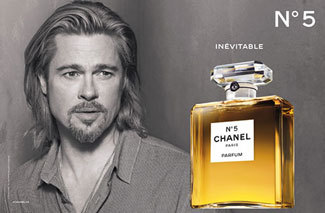 Brad Pitt wants you to smell good with Chanel No. 5

This stars-as-shills is a new trend of just the past few years and I think it's no accident it coincides with movie stars losing some luster with cinema audiences. Decades ago, movie stars were on pedestals -- remote and audiences closely associated them with their silver-screen acting roles.

Now, Hollywood stars are seen or heard in TV commercials and some are eager to comment on political/social issues. Back in the day, stars kept their politics to themselves, so they didn't polarize their appeal. It's their choice either way; I'm simply pointing out a little-appreciated shift in our celebrity-obsessed landscape.

Sports and music celebrities have been willing pitchmen for what seems like forever, but for years this was taboo for movie talent. What's changed? One thing is the rise of reality TV celebrities -- the Pawn Stars, Snooki and all those quarreling Real Housewives -- who are eager endorsers and even more mercantile with licensed products built around their personas. The riches from those endorsements caught the eye of movie stars, particularly when film salaries started going down as the cash-cow DVD market for movies went into decline in 2005.

A second economic squeeze on movie star salaries occurred in 2010, when Hollywood power brokers were rattled that movie star-vehicle movies were stumbling at the box office: the carnage included Land of the Lost and Year One starring youth-audience faves Will Ferrell and Jack Black respectively, and also well-made thriller The Taking of Pelham 123 featuring John Travolta and Denzel Washington. The next year, Tom Hanks and Julie Roberts flopped with what looked like a sure-thing -- warm romantic comedy Larry Crowne.

What ignites box office instead are movies based on comic books or other well-known popular culture properties -- which is a trend still very much in evidence today. In the aftermath, the going rate for top star salaries eroded from a $20 million peak a decade ago to more like $15 million today (salaries can soar above that mark if there's a bonus clause for blockbuster results and if stars share risk by accepting lower upfront salaries). The of trend falling star salaries made the extra income from endorsement gigs a necessity to keep up payments on all those vacation homes, jet plane and child support/alimony obligations.

With that history, media pundits like to pile on with the overstatement star power is dead (overstated because the press loves exaggerated stories that the rich and famous are suffering). Not true. It's still there, though dimmed. But clearly, stars don't drive decisions to make movies like they had for decades.

Three disclaimers are in order: Movie stars in past decades did appear in some product ads to plug specific films for their studios without getting any direct financial benefit. Their tours as hucksters were rather limited in scope and duration. Second, for years, stars in the twilight of their careers would appear in advertising as presenters. For example, James Garner fronted memorably-funny Polaroid camera ads and Henry Fonda pitched Lifesavers mints--but years after they decamped from the A-list. Finally, Hollywood stars shilled for products in isolated overseas territories when those advertisements didn't seep back to the United States, prior to the digital-media revolution.

Another reason that today's movie stars are seen by audiences as having clay feet is that their foibles and misconduct get broadcast in the growing paparazzi culture, which shatters the image of their screen personae. Tabloid headlines of domestic strife or checking into rehab make movie stars seem like mere mortals. My book Marketing To Moviegoers: Third Edition recounts another type of image deflation: "Reflecting embarrassment that sometimes mars talent relationships, watchmaker Raymond Weil sued Oscar-winner Charlize Theron in 2007, alleging she breached their 2005 contract by wearing competitors' wristwatches in public. The lawsuit said she was paid 'substantial funds,' and the watchmaker had spent $20 million in advertising containing her image."

I'm always amused that some movie stars fancy themselves as "artists," despite the grabbing for endorsement paychecks. That word pops up in movie awards shows, and from the lips of stars and their agents (hoping that perhaps the audience will associate the latest Transformers movie with the Mona Lisa?). On very rare occasions, an acting performance or movie may rise to the lofty height of fine art. But most of the time, even the best movies are simply high-quality popular culture.

The audience doesn't buy the idea that a movie star is really exalted if he or she is doing voice-over narration or appearing in commercials. Pitchmen are rather commonplace. This diminishes star power, but those stars have bills to pay.