In his book The Plague, Albert Camus makes an intriguing assertion, "The evil in the world comes almost always from ignorance, and goodwill can cause as much damage as ill-will if it is not enlightened."

The issues raised by Camus take me back to a less enlightened time in my life, growing up in New Zealand. I am a late bloomer, a mature worldview was a slow time coming for me. What is more, I was brought up in a very eurocentric environment.

I encountered the horrific history of slavery, but racism seemed like a blurry figure in the distance; a historical artifact.

I first heard N.W.A. when I was around ten years old. The cussing and provocative nature of the music was addictive; I had a healthy distrust of phoney authority. I had no real understanding of the context of N.W.A., but their aggressive music made me feel wide-eyed with innocent mischief.

In my twenties I started a beat poetry band and expressed my creative zest for beats and words with some enthusiastic, albeit clumsy, spoken-word. I had no flow, just an ounce of rhythm and a love of language.

I was under the misapprehension that if you really loved something it meant you would naturally be good at it. I was a terrible rapper, but my O.C.D tendencies can make giving up something I'm obsessed with difficult.

One day, I began to string a set of expletives together which I kept repeating incessantly. From this compulsive cussing I formed a sketch. I joked that it was a simple guide to freestyle gangster rap that Dr. Dre had imparted to me in a vision. I used the N-word in the joke. I thought it was subversive, satirical and amusing.

It wasn't -- I confused any reaction at all with positive affirmation.

I should explain here that Auckland, New Zealand, is the largest Polynesian city in the world. It is a multi-cultural city that I was lucky to experience. However I didn't have any real connection with black people.

But I loved hip-hop culture. I loved imitating it. For example, I got a friend's kid sister to braid my hair in corn rows. It looked terrible. I even payed a hairdresser an exorbitant amount of money to turn my white hair into dreadlocks which also looked (and smelt) off. My immaturity a vehicle for my naivety. 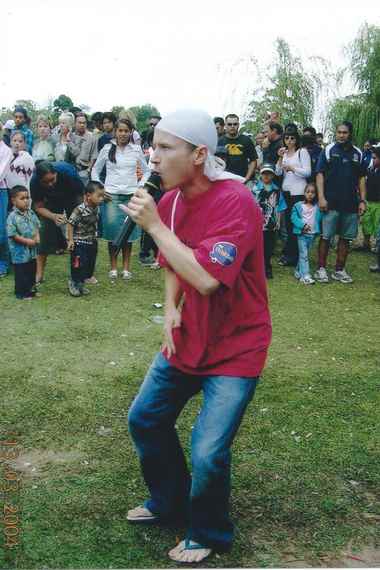 Cut now to London, where I travelled to after drama school to seek my fame and fortune.

My friend Richard, a guy from the clothing store where I worked, invited me to one of his hip-hop nights. After a few drinks, I grabbed the mic and performed my "How to Freestyle Gangsta Rap" sketch. It was a room full of black guys.

I had bonded with them enough that they could see my use of the N-word was linked to some psychological screws missing. They sat there puzzled for a while and then someone gently removed the mic from my grasp.

Darren, who became a dear friend (and my D.J.) said that he thought I was brave. But it wasn't so much bravery as it was cluelessness.

With regrettable insistence, I continued performing this sketch. I thought I was pretty funny but I was the only one. P.K., a genuinely talented rapper, took me aside after one of my performances,

"Hey Robin, you put on a good show and all but the N-word. That stings."

"P.K.! Don't take it so seriously!" I replied and patted him on the back, in an act that now can only be described as extreme self-whiteousnous.

"You can't perform that in America," Darren warned of my skit. "It will be too raw. Race is different over there."

"Don't be silly Darren. I'm not racist," I said and patted him again on the back.

Even then I didn't get it.

I took the show Darren (aka D.J Masonic and M.C Rockit) and I developed to New York. While there I befriended a black guy. He was a musician and we quickly hit it off. I begged him to come along and see me performing my one man show at The Bowery Poetry Club.

I didn't see my new friend after the show but he did email me. He said he had arrived with his friend, the only two black people in the audience, just as I began to throw out the N-word. It had hurt his feelings, offended him and made him angry.

Then I started to get it.

I felt sad. My self-whiteous bubble was beginning to burst. I had nothing to stand on. My own ignorance was glaring at me in the mirror of self-awareness and I felt a blush of shame run through me under its humiliating gaze.

I never get when people say, "I have no regrets." I will continue to apologize forever for my idiocy.

The N-word can be used by N.W.A. -- they can do what they want with the word. It is their right. I never had the right.

Slavery hasn't just left scars, the wounds are still festering and the N-word is symbolic of an ignorant hate that survives and slows our collective healing.

We all say dumb things, a prime example being Giuliana Rancic's recent racist remarks. We can all be guilty of slipping into our own limited awareness at times.

We must make examples of our human fallibilities to encourage a discourse that is educational and transformative. Evil stems from ignorance. By understanding my human wrongs, it has clarified for me what is truly right, the just fight for all human rights.