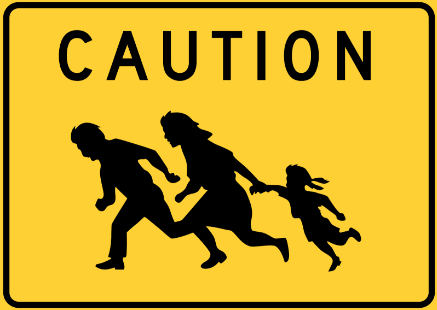 Note: Latinx is used in place of the commonly-utilized Latino, because as a gender-neutral descriptor, it better encompasses the many Latinx communities in the U.S.

Immigration reform activists often laud the U.S. as a "nation of immigrants," but before it was that, it was, and still is, a nation of settlers. There is a direct connection between the colonization of the U.S., the development of its imagined community, and the criminalization of Latinxs as the embodiment of "illegality."

The U.S., as a settler colony, developed out of European settlements in North America, enacting genocide on indigenous communities, appropriating land as property, forcefully incorporating enslaved African people into its settlement project, and declaring the land the rightful home to the European settler population.

Of course people born in the United States today do not think of themselves as settlers, instead they prefer and believe the term native-born, which naturalizes the idea that some belong and others do not. But make no mistake, every non-indigenous person in the U.S. consolidates the settler-colony; that includes many of us. In a multiracial, settler-colonial society, when we talk of citizenship, we are talking about more than legal protections--we are talking about having your humanity recognized. Illegality, or the perception of illegality, tells us that some people do not deserve human rights.

By creating a construct of illegality and assigning it to a broad and diverse group of people, the U.S. racializes a category of human beings who, in the eyes of many in the dominant culture, embody illegality, regardless of their actual status. This erects both a real and imaginary border to police the boundaries of an imaginary community.

For example, during a televised major league baseball game in 2013, Marc Anthony, a world-famous, New York-born Puerto Rican vocalist, sang "God Bless America." The subsequent backlash on Twitter was palpable, as many seemed unaware that Marc Anthony is in fact an American citizen:

The sad irony of Marc-Anthony-Is-Not-American-Gate is that "God Bless America," a song that celebrates the U.S. settler colony, was written by a Russian-Jewish immigrant, and that all Puerto Ricans, by virtue of American neo-imperialism are U.S. citizens.

Marc Anthony is rich and famous, and the consequences of the backlash for him were limited to a bruised ego and some media attention. But instances like this one are a reminder that to many white U.S. citizens, there are extrajudicial limits to American belongingness. This is part of a tendency in the United States to conflate all people of Latin American origin into the categories Latinx or Hispanic. In this way, people visibly racialized as Latinx, usually those perceived as non-white, cannot fully belong to the imagined community.

For the less privileged, the policing of an imagined community can have very real consequences, like the targeted murder of Marcelo Lucero, an Ecuadorean immigrant. In 2008 he was killed by a gang of teens in the town of Patchogue, Long Island who were "hunting Latinos." An event space near the site of his murder later became the location of a Donald Trump presidential rally in April of 2016, a move than many felt was an affirmation to the local white supremacist culture.

In addition to acts of violence, an imagined community also finds legal ways to police its boundaries, such Arizona's SB-1070, a state law which among other things, charges law enforcement officers with the duty to demand immigration papers of anyone who may appear to be an undocumented immigrant. Alabama and Georgia have followed suit with similar laws. In states like these, individuals that are racialized as Latinx find themselves in jeopardy of harassment, violence, and detention at the hands of law enforcement officers. This model of enforcement has been celebrated by Donald Trump as an effective and even desirable way by which undocumented immigration may be addressed.

The construction of Latinxs as personifying the embodiment of "illegality" ensures the economic, political, and social designation of Latinxs in the U.S. as an inferior racialized group. And while it's true that diverse perceptions of who is and is not Latinx leaves some untouched by this reality, for the Latinx communities around the country this has very real consequences. An immigration reform movement that attempts to accommodate "illegality" within its parameters affirms the perceived status of Latinxs. The key to reversing this is to undo illegality altogether and to question and dismantle, in solidarity with indigenous nations, the logic of the settler colony.