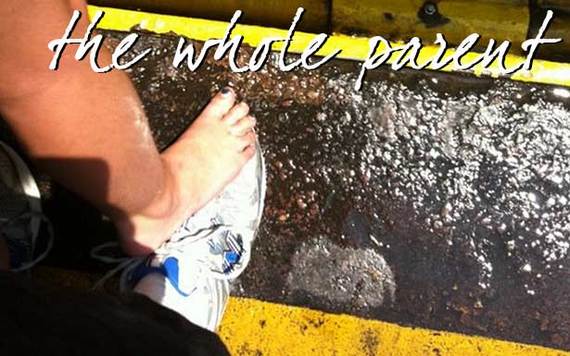 Men do need help. And there is no doubt that divorce brings out some of the worst traits and stereotypes in both sexes, and ramps them up to extreme levels. Men who have previously been unable to access or express any anger are suddenly screaming and throwing things or acting out in way more harmful to themselves. And women, now threatened with shame and financial ruin, retreat into a more defensive and alpha-protective mode.

What happens early on is communication breaks down. Misunderstandings take place. And more hurt and anger is piled on to the flames of the fire.

Just like in first aid fire training, at this point we need to STOP. DROP. And ROLL.

STOP the escalation of the flames. Don't respond in-kind. Step out of the hurt role you are in and DO NOT stoke the flames, for any reason.

DROP the pretense that you are hurting more than the other person. DROP the charges. DROP the battle-axe and see if there are cooperative ways to work together.

ROLL with it. Let things go. Stress is high; it's probably not all about you, even if your ex-partner says it is. ROLL with the punches and don't return the aggression and anger.

And then when you have a moment to pat out your own flaming clothes you can also see the flames have been reaching out and threatening your kids too. With a moment of self-awareness we can stop the fire building practices we learned in our dysfunctional past and begin working towards a healthy divorce. I know that may sound like a fantasy, new-age, term, but it's possible.

The system of divorce (attorneys, courts, counselors) is not set up to support a healthy separation and transition into co-parenting. But, you can ask to slow things down when the rhetoric begins to get too hot. You can explore collaborative divorce. You can be open to the idea of building the parenting plan first and the divorce second.

And we have to be able to look at the traditional, system supported, outcomes of divorce, so that we can examine what's working and what's not.

NOTE: This concept of collaborative co-parenting will not be available to everyone. There may be couples where the damage and acting out has gone too far. There are still plenty of ways you can refuse to feed the fire and not give up your rights and legal position in the upcoming negotiations.

In the case of couples willing to work on the leading edge of collaborative divorce, there are plenty of ways you can make the transition into co-parent much easier. But we've got to talk about it together. The next men's movement is going to include women. And the next men's movement will be about parenting and co-parenting.

In the stereotypical divorce process, that still holds true for 85 percent of all divorces in my state, Texas, the woman is awarded the custodial parent role and the man is awarded a hefty child support payment. In this model, the courts see the MOM as the loving relationship and the DAD as the paycheck.

The system has evolved into this cow path for the slaughter of innocent men over time. And in my case, even though we took the high road, I was offered this piece of advice, from our $200-an-hour family therapist who specialized in building cooperative parenting plans.

"If you go to court she's going to get this, so we might as well start there and see what we can do to smooth the transition for the kids."

This is also wrong.

In the next men's movement both men and women will be working together to map out a healthy divorce plan, that is fair to both mom and dad. And counselors who are being paid to shepherd those willing parents-to-coparents won't reflexively jump to the SPO and custodial non-custodial parenting plan.

It's easy to see why this stereotype came into being. Men have traditionally been the primary breadwinner. Women have been the primary nurturing parent. And my then-wife and I worked to promote and preserve those roles in our marriage. It was OUR PLAN TOO. But it wasn't because she was the best nurturer, or that I was the best breadwinner. It was because she was the mom and I was the dad.

Again, I don't want it to seem that I'm rebelling against some of this tradition. I'm not. I was happy for the mother of my kids to have the time to be MOM. And for that I traded some additional time away from the home, to make more money, so that this little nuclear unit could be supported.

We chose these roles. Sure they were based on traditional and historical norms, but we agreed with some of the premise. And I willingly sacrificed some of my DAD time to make their lives more comfortable, to be able to provide the good neighborhood and good schools.

In divorce, things are different. You still want the same things for you kids. But the shift happens when this cow path (woman-nurture, man-money) has become regulated to the point of law.

Reaching over the aisle as a man is not easy. Everything in the court system is set to drive us into the approved plan.

And allowing the negotiation to happen, must be hard for a woman, who is threatened with getting less than she could get if she just went to court. She's got the losing proposition in this negotiation.

But it's the kids who stand to lose the most from this imbalanced systemic approach. Dad is more than money. And mom is capable of making just as much money (let's table the fair pay discussion for the moment) as dad. These old roles no longer fit the educated and compassionate couple. But the road to a good and healthy co-parenting plan is not a well-worn path. There are books and attorneys who will advise you along the route, but the real negotiations are going to happen between you and your soon-to-be ex.

I'd like to start the dialogue between us sooner rather than later. For myself, yes, but also for the moms and dads who will be heading down the cow path shortly. We can do better. We can help raise the conversation back to equity and fairness. Today it's "here's what you're going to get if she goes to court." That's not a way to build a trusting negotiation, or even craft a balanced parenting plan.

We don't have to burn the system or relationship down to the ground to get a fair deal for both parents. But we do have to open the discussion beyond the SPO and custodial mom. And, I understand, moms, you have more to lose in this discussion. But your kids have more to gain. A dad who can support himself and contribute to a healthy co-parenting plan. And a mom who's willing to stretch, in the "best interest of the kids" to give that same dad some additional time and rights so that he can show up in the best way.

It's a trust issue. And it's not going to be easy. But we can make a more holistic system. We can soften the blow of divorce on the kids. And we can build stronger co-parenting relationships from respect rather than ashes.

See The Whole Parent blog for more of this story. And I welcome your comments and suggestions here. And your participation via Facebook and Twitter.