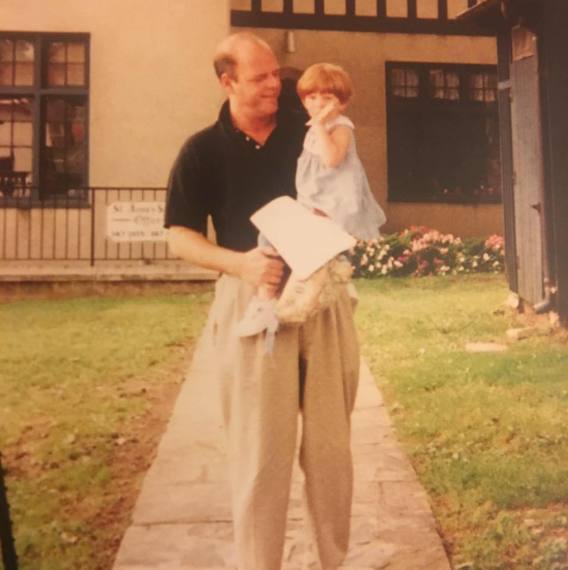 First day of nursery school for my daughter, twenty years later-the next chapter.

When I signed up to move my daughter Maeve, I thought, "What a snap!

Soon I discovered, that as someone that is 6'6 and ½, it was going to be a tight fit. Trying a variety of sizes of box trucks, I just did not fit comfortably. There was a little bit of a Goldilocks and three bears thing going on here- I needed something I could fit into to drive.

My next step was to rent a pickup truck and a trailer. Of course, nothing is in the same place much less the same city. When I rented my truck I then had to drive to the next town to get the trailer; I discovered my brake lights did not work with a trailer. So what took most all of a day had to be tweaked again, entailing me returning the truck, replacing the first truck for one where the lights worked, then driving back again to get the trailer.

As I got back to the house that evening, I had to move the trailer around back so we could load furniture from the basement. Jumping into the truck, I put it into gear, and the dining room table I had just loaded into the back fell off, shattering on the pavement. I then wondered what this dollar-saving venture is costing.

Soon came time for the clothes, boxes of shoes, and accessories that started piling up. Oh, and by the way, we will be passing my son's school so let's be sure to deliver just a few things there. Again, "No problem," I thought until I was pointed to the one-ton couch and a club chair.

At 9 pm I laid down on the air conditioned floor of my home, huffing and puffing with the drama of someone that had survived escaping enemy forces. Panting, laying in a puddle of my sweat, I think to myself, "I can do this. I'm still young. 57 is not that old." Just as I was thinking that I felt something funny in my mouth, and sitting up, I spit out a crown from an old root canal. Yes, it was that kind of day.

The next day was the action-packed part two of what I was now calling "Moving Imelda" (yes in honor of Imelda Marcos and her excessive collections ). Still more to pack, including furniture, all covered in tarps, Bungee cords, and ropes. Unlike my dad or son who could tie specific Boy Scout knots, mine were more of a hot mess variety, with all appearances of being tied by a madman, they could only be untied with hacking away at it with a knife.

Finally, at about 12 noon that day I was able to move out of the driveway and in keeping with the whole feel of the day I found myself singing the theme song to Beverly Hillbillies. "Come and list to my story about a man name Jed. A poor mountaineer, barley kept his family fed..." And so I drove with a trailer weighted to the ground and loaded pick up two stories high. In hindsight, I have no idea how the two front wheels stayed on the ground.

Beyond the inconvenience, with one little thing after the next, I can only think how lucky I am to see my children take flight. I have seen too many stories where parents never get to see their offspring hatch. They don't get to see them go from preschool to adulthood. I know too many incidences where parents just have not been as lucky and blessed as I feel this very moment. Yes, I stumbled through the move dropping and breaking things. I think to myself, "This is dessert; I love every second." My back is killing me, yet somehow at this very moment with a few bucks in my pocket and a missing tooth, I feel like a millionaire. I feel rich because of these experiences with my children.

While this is a reflective time of gratitude, I am painfully reminded of my work as founder of Less Cancer and why it is so critical we work to once and for all end cancer so more parents can have the gift of seeing their children take flight. Too many lives are interrupted and cut short because of cancer. Too many of us don't get these moments. These days of inconvenience bring me so much joy. I can't help but think of friends and family who too would have savored these moments as well with their children if their journey had not been cut short-missing all the significant plateaus from childhood to adulthood.

Upon our arrival, I look at my daughter, the expression on her face is one of concern, and I can clearly see the thought bubble above her head that says: I should have called a mover!

But she doesn't know that the money spent would have deprived me of something precious: an appreciation of the love I feel for my both my children. My motivations for founding Less Cancer include a long list and more moments with our kids would be right on top.