Some analysts are predicting that the commodity price boom of the new millennium as something that has played itself out. Except for shale gas and its downward pressure on U.S. natural gas prices, however, natural resource-based commodity prices have remained high by historical records in the last few years, despite the feebleness of the recent global economic recovery. The great spike in commodity prices starting at the end of the 1990s has not been significantly reversed along the global downturn, remaining on average not far from their 2008 levels (Chart 1). And in fact, they have occasionally exhibited signs of revival quicker than the global economic output (Chart 2). So the question now is: have we entered a phase of descending commodity prices in general? 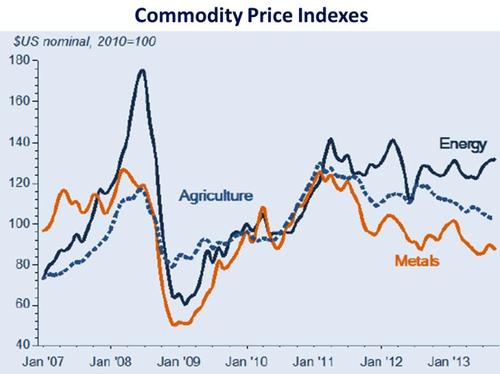 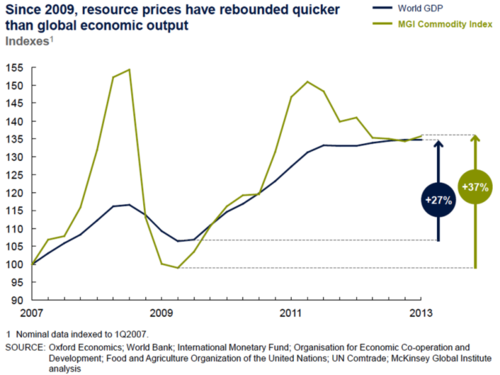 Can history shed some light here?

Several authors have recently revisited long, historic series of commodity prices - see e.g. Erten and Ocampo (2012), Jacks (2013), and Arezki et al (2013). The focus has been either on the old Prebisch-Singer hypothesis - according to which the "terms of trade" between primary products and manufactured goods tended to fall in the very long run - and/or on the frequency and shapes of past price cycles.

Directions - upward or downward - of long-term price trends coming out from these studies vary among different types of commodities and they depend on starting points in time used as a reference. The picture gets blurry in some cases when commodities themselves have evolved and are hard to compare over time (e.g., poultry or soybean production today are highly different from what they were decades ago).

Results have been more convergent on the revelation of previous cycles and of rising price volatility. Those works tend to agree on the localization of at least three supercycles of commodities since the 19th century, besides the one initiated at the end of the 1990s. Typically 20-year boom periods have reflected strong demand associated with moments of rapid industrialization and urbanization - like the US in the 1890s, or China in the 2000s - along which supply takes a long while before matching that demand. When this happens, periods of much lower commodity prices have followed.

Spotting trends or previous cycles is a highly useful exercise for it calls attention to the interplay between demand and supply over time. However we can't use this to forecast future paths of specific or general commodity prices at a certain point in time - as illustrated by the non-homogeneity of shapes of previous cycles.

As one can see on Chart 3, commodity prices relative to manufactured goods may move and stay significantly lower or higher for substantial periods regardless of the presence of a long-run trend or drift. It all hinges on the relative strength of forces behind the demand for primary commodities relative to the demand for manufactures, and the supply of commodities relative to the supply of manufactures (Brahmbhatt and Canuto, 2010). When looking ahead at a certain point in time, it is fundamental to approach the nature, intensity and time length of factors playing on each side of the equation at that specific moment: one cannot look for any predetermined historic shape of commodity super-cycles. Chart 3 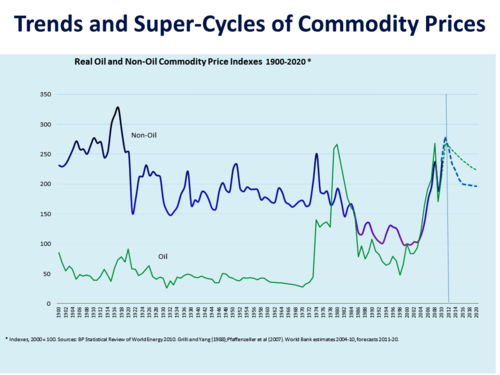 When independently raising their very long-term gloomy prospects regarding commodity prices, Hans Singer and Raul Prebisch in 1949 emphasized the two different sides of the equation. Singer's price pessimism was based on strong beliefs about relatively unfavorable price- and income-elasticities of demand for commodities, whereas Prebisch suggested an asymmetry in the appropriation of productivity gains between commodity-dependent and industrialized countries. While eventual productivity gains on the former's side were automatically transmitted into lower prices, they would be captured in the form of stable prices and rising wages and profit volumes in the latter, given the prevalence of cost-plus pricing and labor unionization in industry. This fit well with Prebisch's critical views about social and political structures inherited by Latin America from its past as a leading commodity producer, as compared with the evolution toward a welfare state in advanced, industrialized US and Europe. Thence his views about the need for Latin America to diversify towards a manufacturing industry-based society, like other natural resource-rich advanced economies - Canada, Australia - had apparently done.

This is no time and place for any evaluation of how dated and/or incomplete those "structuralist" views were, much less of the policy proposals that came over time to be associated with them. However, in our view, it remains useful to think of the evolution of commodity prices relative to manufactured goods as reflecting the relative paths of demand elasticities, productivity and supply bottlenecks.

Have we started the descending phase of the supercycle?

It is worth highlighting two distinctive features of the current commodity supercycle, the peak of which has supposedly been reached:

First, the correlation between resource prices over the past 30 years has substantially increased (McKinsey, 2013). Beyond the strong demand-pull on all commodities exercised by China's industrialization-cum-urbanization, there is a higher correlation induced by the technological evolution. Natural resource-based products have risen as input and, therefore, as costs to other commodities (e.g., fertilizers in agriculture). Furthermore, substitutability between uses (e.g., sugarcane can either turn into ethanol or sugar) and sources (e.g., alternative fuels and forms of power generation) has increased, making price shock transmission more widespread.

Second, volatility has been higher and rising, when compared to the past (Arezki et al, 2013). This is often associated with the increased size of commodities as a class of financial assets, even if ultimately supply and demand fundamentals operate as gravity centers (Canuto, 2008) (Songwe, 2011). There is also much reference to the role played by an increasing incidence of natural phenomena (floods and droughts, variable temperatures) on agriculture production, as well as of social and political factors on oils, metals and minerals (conflicts, labor strikes). Nevertheless those factors can be mostly associated with short-term volatility.

Beyond short-term supply and price fluctuations, more structural factors seem to be at play behind the persistent volatility:

"Supply appears to be progressively less able to adjust rapidly to changes in demand because new reserves are more challenging and expensive to access. For example, offshore oil requires more sophisticated production techniques. Available arable land is not connected to markets through infrastructure. Mineral resources increasingly need to be developed in regions that have high political risks. Such factors not only increase the risk of disruptions to supply but also make supply even more inelastic. As supply becomes increasingly unresponsive to demand, even small changes in that demand can result in significant changes in prices. Investors may be deterred by the volatility in resource prices and become less inclined to invest in new supply or resource productivity initiatives." (McKinsey, 2013, p.1)

At the margin, except for shale gas, supply-side costs are still pointing upwards almost everywhere in the commodities universe. There is no sight of a pace of innovation and physical investment enough to grant the supply elasticity necessary for that price-descending phase of the supercycle to unfold. And as promising as the shale-gas revolution may look like to the US economy in the years ahead, it seems a stretch to expect it - through substitution and correlation - to be a fully countervailing factor to rising marginal costs of other natural resource-based products.

On the other side of the equation, in turn, the current growth soft patch faced by many emerging markets does not point out to any drastic future reversal of its propensity to create demand for commodities. Urbanization and poverty reduction have remained steady in the developing world, and there is no sign of a major macroeconomic downturn beyond the recent accommodation to lower growth rates (Canuto, 2013).

"If one may paraphrase Mark Twain, recent news about the death of the commodity supercycle and of a 'commodity bust' were somewhat exaggerated."

This article is based on notes that I prepared for a round table on "The commodities outlook: moving past the supercycle" at the 2013 Toronto Global Forum.