How do we teach civic values to young people at a time when money has thoroughly corrupted politics, where serious policy discussions have been drown out in favor of infotainments, manufactured outrage and 'click-bait?'

How do we instill in our citizenry a sense of duty and common purpose, the belief that we are indeed one nation with a common future, that in the end we must matter to each other, that we share a common fate, that the experiment called America is ongoing, that from the many, we must strive to be one?

How do we begin to bridge our economic, political, and ethnic divides, and work shoulder to shoulder to build a future we would want to all live in?

Like most Americans, I am deeply concerned about our collective future. Social mobility is plummeting, debt continues to pile up, good jobs are increasingly hard to come by, a fearful angry mood pervades. Our leaders stand pat while our basic public infrastructure crumbles around us. A better world for our children? Most would say that dream is gone.

But then something comes along which gives one real hope. I am speaking of The Franklin Project and the announcement today that Dartmouth College has chosen to adopt it for their undergraduate population as a means of creating a national model for public service. 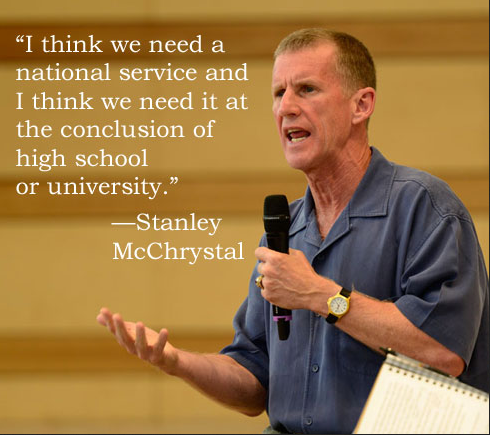 Photo courtesy of The Aspen Institute

Begun by General Stanley McChrystal and first presented at The Aspen Ideas Festival in 2012, the principle is this -- we all need to serve our country in some capacity. Here is a 2 Page PDF flyer explaining the program. Those who serve in the military account for 1% of the population. How could the rest of us serve, and how would that help to revitalize a sense of civic duty and connection to one's fellow Americans?

Which brings us to Dartmouth College. Last October, I traveled with my wife, Pauline to Hanover for her first Alumni Council meeting. I am Class of '81 and she is Class of '88. The main topic of discussion during the three days was how the student body could mature, become more responsible and worldly, better prepared for the much larger world beyond. "Moving Dartmouth Forward" is the name of this broad initiative. For me, The Franklin Project seemed a great fit for Dartmouth. How do you instill a greater sense of purpose and direction in a population of 4200 students 18-21? If everyone were to 'serve' in one capacity or another during a gap year, either before, during, or after college, Dartmouth would be unlike any college in the country, and a far more worldly place. Students applying to Dartmouth would know that they were seeking a place where they could pursue a social mission as well as an education. Dartmouth students are indeed intrepid and there are a number of opportunities for them already to study abroad, take a semester elsewhere, or take time off to work. But The Franklin Project will put all of this on another level.

And so it has come to pass. Some at Dartmouth were already thinking along these lines. Driven by its Director of Professional Services Roger Woolsey, championed by key faculty members like Barbara Will, Associate Dean of Arts and Humanities, and embraced by President Phil Hanlon, Dartmouth is embracing its reinvention. See Year Off to Serve: Dartmouth Partners With Franklin Project.

With Dartmouth coming aboard, how long will it be before the other Ivies seek to adopt this program? As the goal of The Franklin Project is to create a national model for service, how long before schools throughout the country also sign up, before Congress takes this up as national policy? And what of those who don't go to college, who can't afford it, whose talents aren't necessarily academic? A year of service, fulfilling one's civic duty as an American, still has to be part of the curriculum. In a time when we have fewer and fewer encounters with those whose experiences differ from ours economically, racially, and religiously, it is imperative that we as Americans have such common experiences. One could well argue that both World War I and World War II changed American society enormously because it was something we all went through together, exposing us to people whose life experiences differed radically from our own. Today, it won't be a war that mobilizes us, not with only 1% doing the fighting. It will be the other 99% who will stake their claim as citizens, working together in common to create America's future.

Of course, many countries throughout the world have such programs of national service, a year during which one serves one's country and community. The question for America is this -- are we a society or a collection of individuals? Do we still believe in E Pluribus Unum, that from the many we are one, or is it devil take the hindmost? I have faith that we can again become the country of the future, and I am very proud of my alma mater for taking this bold step. Despite our current despair and our current political dysfunction, there is nonetheless a growing passion to remake civil society, to share in a common dream. You won't see it too much on TV or hear it on the radio. It doesn't have us running to the voting booths. It is not a topic for mass media or politics. But as Dartmouth's actions show, and indeed what The Franklin Project itself is showing, is that as a nation we can still control our destiny, and that the people are ready to take on that responsibility.