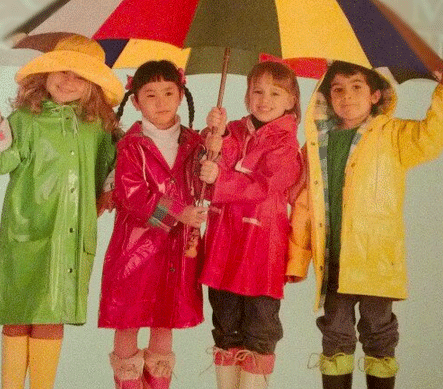 One of these things is not like the other. And that's ok.

I grew up in a smallish town in the middle of Massachusetts. Ok, technically it was a city, but it had the feel of a small town. Fairly suburban, cars everywhere and everyone knew each other through at least six degrees of separation.

And boy was it white.

I'm not saying it was as white-washed as the middle of North Dakota. There were definitely other Asian kids growing up that I knew. But for some reason, no one really talked about the fact that my face looked different from the 23 others in the yearly class picture. No one acknowledged the elephant in the room. I grew up fairly unaware of my racial identity.

Then I moved to New York City and suddenly, I was Asian.

It seemed that everyone in New York wanted to know where I was "from." Barest acquaintances would start speaking in Japanese, Chinese or any other language they thought was appropriate to my ethnicity. Instead of people describing me as the "short girl with the glasses," it was now the "short Asian girl with the glasses." One of my exes used to joke that he had "yellow fever."

At first I was confused. Then I thought, "Wow, New York is really racist." Then, I tried to go along with the joke of "I'm Asian/but not/I'm a twinkie" (twinkie=white on the inside, yellow on the outside). Then I got annoyed, especially when one person said, when learning my history, "Oh, so you're like, fresh off the boat," casually dismissing the fact I'm an American citizen who has lived here for most of my life. Most of my life in this case is 26 years and six months. I'm 27.

What is up with New Yorkers? I used to think. Why can't they just live and let live? Why do insist on pinpointing my ethnicity via geographical location? Sometimes, I felt like wearing a GPS sign around my neck that said, "Was born here" with the appropriate coordinates so the teller at the corner bodega wouldn't start playing the "let me guess what kind of Asian you are" game when I was just trying to buy my morning coffee.

There's nothing to me more insidious than silent racism. Racism that is shoved underneath the bed or whispered behind closed doors is lethal. Nothing is more dangerous and debilitating to a person (or a society) than choosing to willfully ignore the fact that yes, there is a big difference between you and other people that stares you in the face when you look in the mirror. That doesn't make it better or worse. As Jane Elliott, activist and originator of the Blue Eyes/Brown Eyes exercise says:

We don't need a melting pot in this country, folks. We need a salad bowl. In a salad bowl, you put in the different things. You want the vegetables -- the lettuce, the cucumbers, the onions, the green peppers -- to maintain their identity. You appreciate differences.

When I look at what's going on in Ferguson, I wonder: Was silence what made the city explode? If the people of Ferguson were as vocal as New Yorkers are when it comes to "where we come from" would the situation have escalated like it has?

Now I by no means am claiming that New York is a haven of equality. It isn't, by far, and I only have to look at the recent "stop and frisk" policy to know that. I only have to have one more person at a party ask me, "Where are you from-no, where are you from?" or "Do you know karate?" to acknowledge ruefully to myself that we still have a long way to go. "Quiet bias" is alive and thriving in NYC. Just go to 116th street and then walk 20 blocks down and it's evident inequality isn't just tied to economics in this city -- it's tied very much still to race.